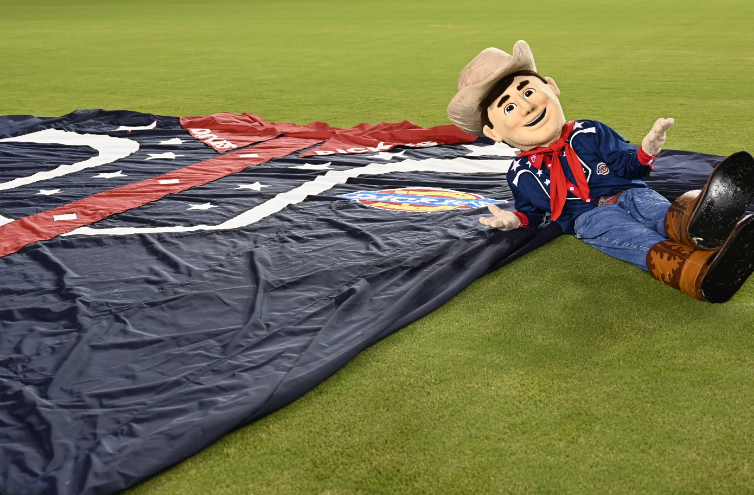 This year Big Tex is celebrating his 70th Birthday, and he’s got a brand new party outfit.

This morning, Dickies representatives revealed a brand new outfit for the iconic cowboy at the Cotton Bowl stadium in Fair Park.  The shirt is so large that it had to be stretched across the field, and still, the only way to get a good look at it from above.

“Big Tex is a big guy,” says fair spokesperson Karissa Condoianis. “He wears size 96 boots and a 95 gallon hat.” The shirt is a size 200 x 325. To put it in perspective, the average collar size for a man is around 16 inches, for big Tex, it’s more than 16 feet. The outfit itself weights 225lbs.

The new design features a navy blue, button down shirt with red accents and fringe. Big Tex is also sporting a brand new pair of blue jeans to boot. Coreena Wright, with Dickies, designed the outfit. She says she took inspiration from Texas icons.

“He’s got a lot to celebrate this year, so we really want to dress him up,” Wright says. “He’s always going back to retro looks. Gene Autry, Roy Rogers inspires us a lot. Really gives him that Texas look.”

Big Tex has already been fitted for the outfit and he’ll officially put it on next week, signaling the start of a new era.