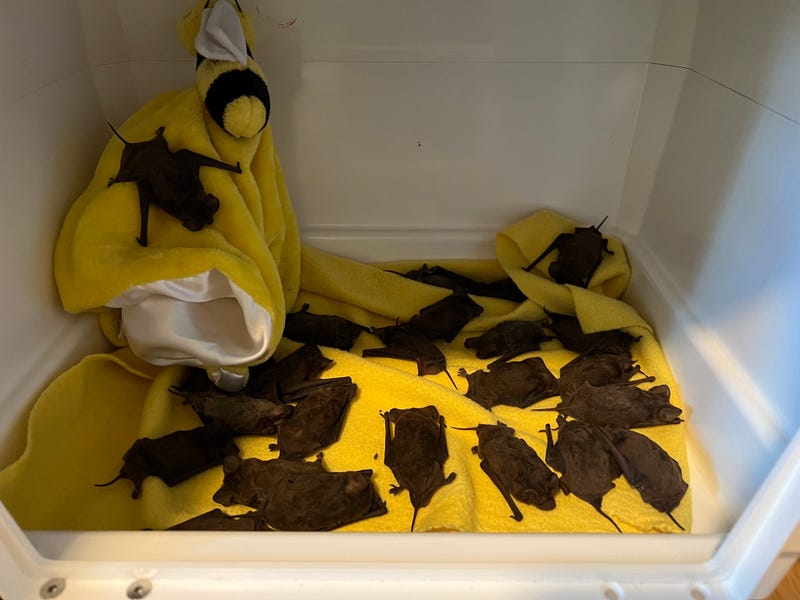 After slipping into hypothermic shock during the recent cold snap in Texas, more than 1,500 bats lost their grip and fell to the ground beneath two Houston-area bridges.

Mary Warwick, the director of the Texas Wildlife Rehabilitation Center, said the Mexican free-tailed bats couldn't keep their grip as temperatures dipped in the low 20s. The tiny creatures went into shock and dropped to the pavement, between 15 and 30 feet below.

"The bats are tiny and have minimal body fat, so they are not able to live long when laying exposed on the ground in freezing temperatures," the Houston Humane Society said in a Facebook post.

Although many of the animals were minutes away from freezing to death, wildlife rescuers were able to rehabilitate the the bats by giving them water and keeping them warm in incubators. Some of the bats were in critical condition and required more intensive care.

Warwick even opened her home to hundreds of the bats, where they recovered in dog kennels in her attic.

"Amazingly, most of bats have survived," the Humane Society said.

The freezing weather is having harsh impacts on wildlife. Freezing temperatures Thursday night sent many of the popular...

In total, more than 1,500 bats were saved in the efforts. The bats belong to two colonies -- one under the Pearland Fite Road Bridge and the other at the Waugh Drive Bridge, where the animals live in crevices and feast on pests like moths and mosquitoes.

Hundreds of more bats returned to their colony at the Pearland Fite Road Bridge late this evening. These poor babies...