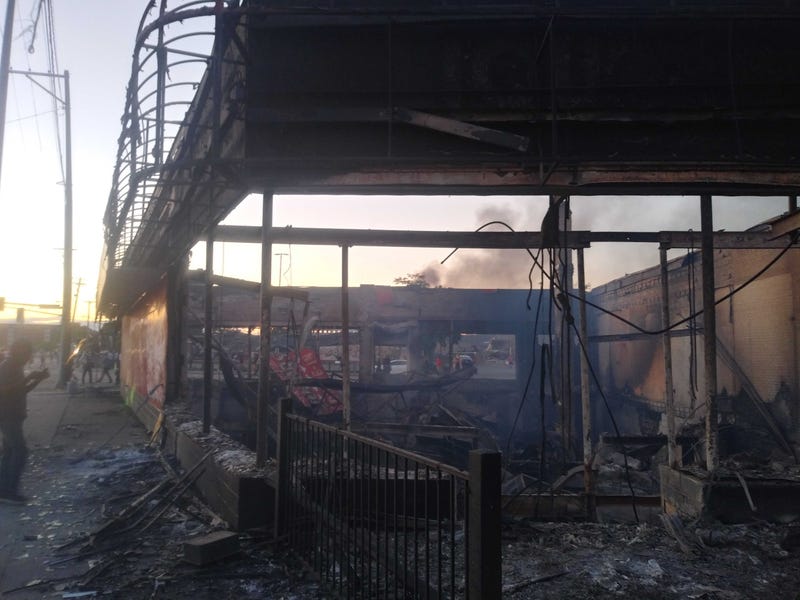 (WCCO) “What you see tonight will replicate tomorrow unless we change something in what we're doing," Minnesota Governor Tim Walz said during an early Saturday morning press conference with Minneapolis Mayor Frey.

As the region's top officials begged for it to stop, fires burned, a freeway was shut down, the National Guard was called in for its largest deployment in Minnesota history.

And still protesters, rioters and looters came, pouring into the city

Walz and Frey urged people to go home in a joint press conference at 1:30 a.m. Saturday morning. Gov. Walz described the situation as incredibly dangerous, fluid and dynamic, while Mayor Frey called for people to do right by their neighbors and communities.

Walz called tonight’s law enforcement deployment the largest civilian police deployment in history, but still conceded that they cannot arrest everyone, saying that law enforcement is doing the best they can. Walz also claimed responsibility for underestimating the situation and thanked all Minnesotans who stayed home tonight, as well as all the emergency workers.

Walz said the priorities for law enforcement and emergency responders tonight are, in order, to protect life, protect property and restore order. “This is not about George’s death. This is not about disparities being real. This is about chaos,” Walz said.

Taking the stage after Gov. Walz, Mayor Frey urged people to do right by the city and the community and to call family members who might be out protesting to come home. Frey attempted to appeal to a higher calling saying, “We as a city are more than this. We as a city can be so much more than this. There is no honor in burning down your city. There is no pride in looting local businesses who have become staples in their communities.”

Minnesotans, please go home. It’s time to restore peace on our streets and in our neighborhoods. The situation has become dangerous for Minnesotans and first responders.

Instead, the protests spread to Atlanta, Detroit, and more cities around the country, where rioters clashed with police. In Detroit, a man was shot in a protest crowd where people tried to pull mounted officers off horses and one allegedly tried to run over a cop; In Atlanta the CNN Center was damaged.

Overall, the death of Floyd and the ensuing violence have left people, including former President Barack Obama "in anguish."

In Minneapolis, officials made the decision early to basically let the riots play out as a demonstration against police brutality, even walking away from the Third Precinct when it was on fire, letting protesters burn it. Walz later acknowledged that lack of action was a mistake. Walz said the state would take over as the city's response had been an "abject failure."