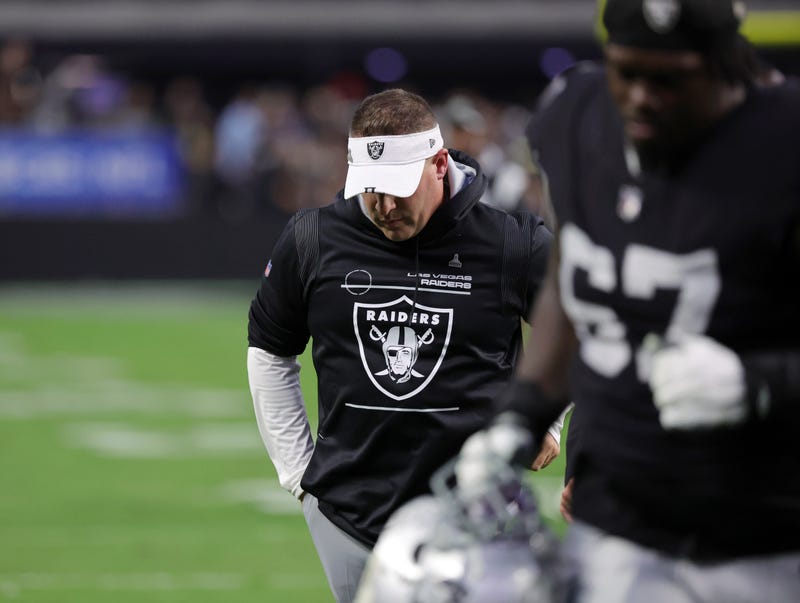 Henderson, NV (AP) - The Raiders were booed off their home field Sunday after their 25-20 loss to the Indianapolis Colts, and Las Vegas first-year coach Josh McDaniels has come under strong media and fan criticism for the 2-7 start.

But the voice that truly counts, the one belonging to owner Mark Davis, said Monday he believes in McDaniels’ plan for turning the Raiders into a winner.

Quarterback Derek Carr, playing on a team-friendly contract with what appears to be a strong quarterback draft class next year, could be one of those changes. Carr sounded as if he knew he was looking at the end when he teared up during the post-game news conference.

“I think the emotion of just nine years of stuff hit me today, for how much I really love this place,” Carr said Sunday.

McDaniels also could make changes to his coaching staff, be it during this season or afterward. He also could take a much closer look at the younger players to better evaluate the overall roster

As expected, McDaniels didn’t get specific when asked what steps he might take, but has weekly discussions with Davis about the state of the franchise.

“He has the same urgency that that we all do, if not more,” McDaniels said. “He’s been here a long time. He’s seen this when it’s been good, and he wants to win as bad or worse than anybody else does. And he feels the frustration at the same time. He’s been incredibly supportive, and that’s important, obviously, as you go forward.”

McDaniels is dealing with some potential unrest in the Raiders’ locker room. Carr and wide receiver Davante Adams said Sunday not everyone shared their level of commitment. McDaniels didn’t dispute that, saying no NFL team has 100% upper-level commitment like those players.

Perhaps along those lines, defensive linemen Matthew Butler, Neil Farrell and Clelin Ferrell were placed on the inactive list against the Colts. On Monday, the Raiders claimed 2019 Los Angeles Chargers first-round pick Jerry Tillery, a defensive lineman, off waivers.

“We had three guys on defense that I’d say just we’re going to keep that internally for us,” McDaniels said. “We’ve handled what we had to handle, and hopefully that will change going forward. But I think two young guys (Butler and Farrell) that are learning how to do everything the right way, and it’s just one of the parts of the process that is sometimes painful.

“But I think in the big picture, trying to create a team that’s disciplined and accountable and those kinds of things is really important for us. Tough decisions sometimes to make, but it’s the right decisions in our mind.”

Punter AJ Cole. He averaged 58.8 yards per punt, including 53.4 in net average. Three of his five punts went inside the 20-yard line, including one at the 5 that helped force the Colts into a three-and-out. Las Vegas scored a touchdown on the ensuing drive.

Pass rush. The Raiders faced a Colts team that had given up 35 sacks, including nine the week before against New England. Las Vegas recorded just one sack of Matt Ryan. Maxx Crosby not only had the lone sack, but also the only quarterback hit.

Wide receiver Davante Adams. He said last week he was paid to come to Las Vegas and make big plays. Adams put the offense on his back Sunday, catching six passes for 102 yards and a 48-yard touchdown that put the Raiders ahead 20-19 with 11:36 left.

The ability to close out games. Las Vegas knew how to win one-possession games in 2021, going 7-2. The Raiders are 0-6 in such games this season. Given they almost certainly will miss the playoffs, the Raiders will rue how close they came and how often.

The Raiders visit AFC West rival Denver on Sunday, a Broncos team also struggling at 3-6. Las Vegas has had the Broncos’ number recently, winning the past five meetings.