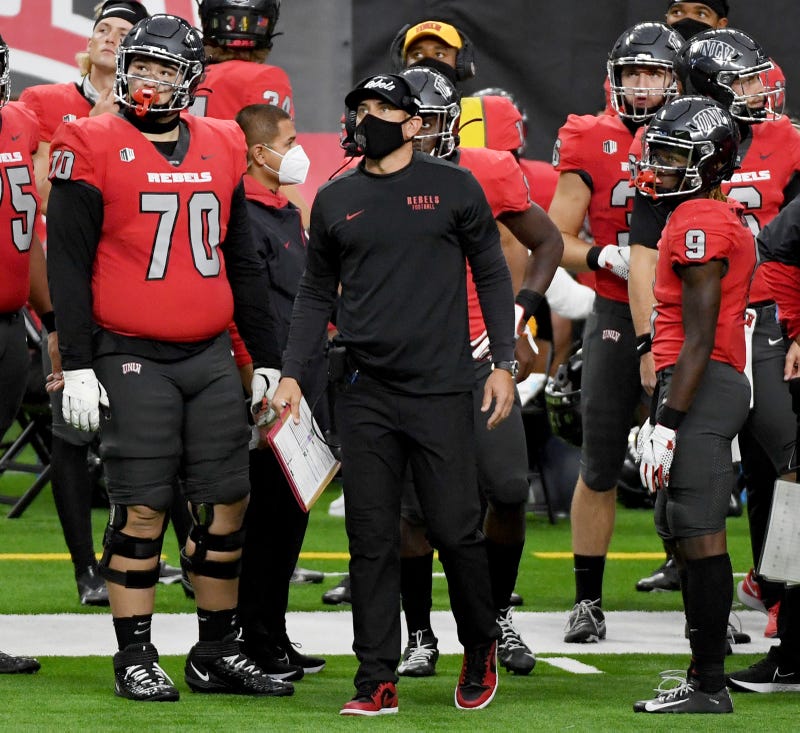 Las Vegas, NV - The UNLV football team will cap off its third season playing at Allegiant Stadium with the annual Battle for the Fremont Cannon vs. UNR as part of a 12-date tentative schedule released Wednesday by the Mountain West.

Under third-year head coach Marcus Arroyo, the Rebels will kick off their 55th season of football by hosting Idaho State from the Big Sky Conference on September 3.

The Mountain West schedule starts September 24 with a trip to Utah State before New Mexico hits town one week later. A trip to San Jose State is slated for October 8 followed by Air Force playing at Allegiant Stadium for the first time one week later.

The Rebels' nonconference schedule wraps up October 22 with a historic trip to Notre Dame in a much-anticipated first meeting between the schools.

Following an off week, the Rebels start the stretch run by visiting San Diego State on November 5 and hosting Fresno State one week later.

UNLV will play its two traditional trophy games in back-to-back weeks this fall, starting by heading to the islands for the annual Ninth Island Showdown sponsored by the California Hotel vs. Hawai'i on November 19. The Rebels then host the Wolf Pack in the regular-season finale November 26 with the famed Fremont Cannon on the line. That Senior Day meeting will also be part of the Silver State Series presented by IBEW and Nevada Donor Network.

"The release of the 2022 schedule is a reminder of why our staff and players are putting in the real work now," said Arroyo. "It's going to be an exciting year with a tough road schedule, including trips to Pac-12 opponent Cal and a likely top-10 test in South Bend -- all in addition to a challenging Mountain West schedule. The home slate includes some great matchups, culminating in a rivalry game at home in Allegiant Stadium for the Fremont Cannon. We will be ready!"

Wednesday's announcement represents the first phase in the 2022 football schedule process. Mountain West national television partners CBS Sports and FOX Sports will next initiate a selection procedure that will also include the shifting of particular games to Fridays. That will be followed by the identification of national network outlets and kick times.