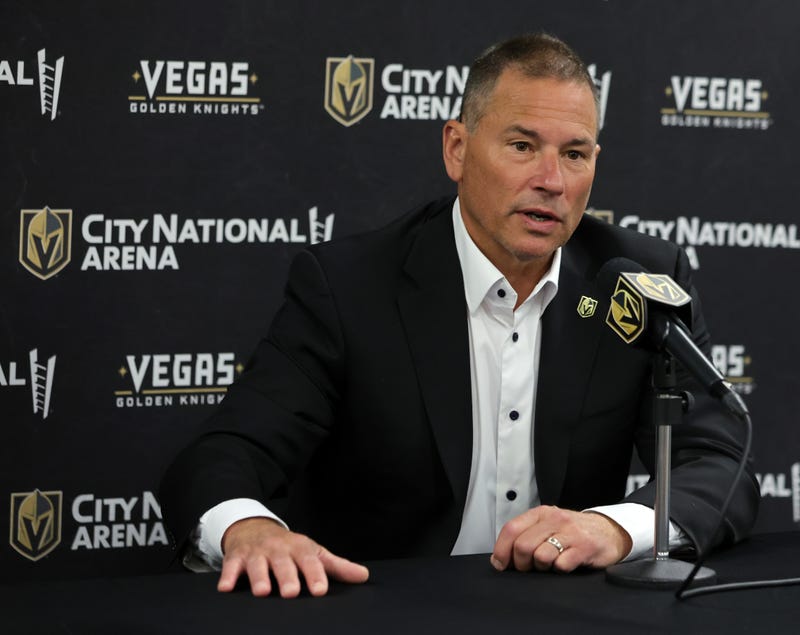 Las Vegas, NV (AP) - One year after missing the playoffs for the first time in the franchise’s existence, the Vegas Golden Knights are eyeing a return with their third coach in six seasons.

Bruce Cassidy replaced Peter DeBoer after both were fired from their respective jobs after last season.

Cassidy arrives from Boston, where he had a 245-108-46 record and led the Bruins to six straight playoff appearances.

DeBoer was dismissed May 16 after Vegas missed the playoffs for the first time in franchise history.

Vegas added veteran Phil Kessel to bolster the offense, which took a hit when Max Pacioretty was traded to Carolina to make room under the salary cap.

Owner Bill Foley proclaimed, “Playoffs in three, Cup in six” before the team’s inaugural campaign, which adds a bit of pressure to Cassidy’s first season, which will also be Vegas’ sixth in the NHL.

Jack Eichel, who in November became the first NHL player to undergo artificial disk replacement surgery on his neck, enjoyed a normal offseason and came into training camp healthy for the first time since the 2019-20 campaign.

“It’s nice to be healthy and have nice peace of mind that I knew where I would be come September and I’d have my health and have an opportunity to have a training camp and preseason and build towards a regular season,” said Eichel, who had 14 goals and 11 assists in 34 games with Vegas last season.

The only discomfort Mark Stone said he’s feeling these days is the type of pain he’s willing to endure. Feeling recovered from a lumbar discectomy in May, the team captain said he’s welcomed soreness due to daily workouts or practices.

“It’s in areas that are a good stiff, using muscles that I really didn’t use for a full year,” said Stone, who missed 45 games last season. “It’s nice to kind of get that soreness back in the legs and stuff like that.”

The 37 games he played last season were his fewest since the 2013-14 campaign, when he appeared in 19 games.

After feeling “lost” the last few years in Arizona, Kessel said the opportunity to play for a team that wants to contend was enticing enough to make him cross the state line.

“I’m excited to be here, I got a lot to prove,” said Kessel, who finished with a career-worst eight goals along with 44 assists last season. “I’m here to prove that it’s the same me.”

Kessel has appeared in 982 consecutive NHL games, the longest active streak, and is seven away from tying Keith Yandle’s record of 989. He’s one goal away from becoming the 13th U.S.-born player to score 400 NHL goals.

Logan Thompson, the AHL Goalie of the Year in 2019, could be the leading candidate to start. Thompson went 10-5-3 with a .914 save percentage in 19 appearances with Vegas last season.

Adin Hill, whom the Golden Knights acquired in a trade with the San Jose Sharks shortly before training camp, and journeyman Michael Hutchinson, who has had stops in Winnipeg, Florida, Colorado and Toronto, are also in camp.

EYE ON THE SCHEDULE

If all goes according to plan, Kessel will tie Yandle’s mark in Las Vegas on Oct. 24 against the Toronto Maple Leafs and will break the record the next night in San Jose. The Knights’ longest homestand is seven games from Jan. 5 to Jan. 21, while their longest road trip immediately follows from Jan. 22 to Feb. 9. Cassidy will return to Boston on Dec. 5, and the Knights will host the Bruins on Dec. 11.