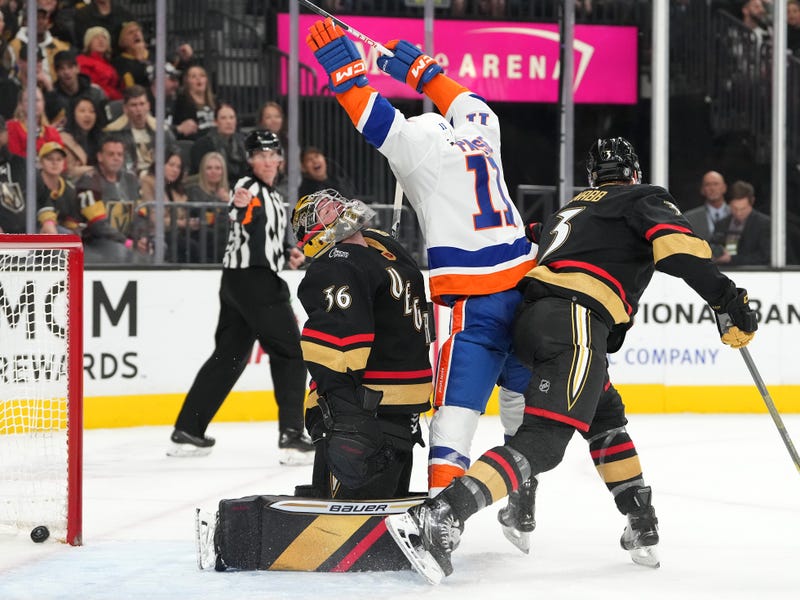 ﻿LAS VEGAS (AP) — Semyon Varlamov stopped 35 shots before leaving with an injury in the third period and the New York Islanders beat the Vegas Golden Knights 5-2 on Saturday night.

Zach Parise and Brock Nelson each had a goal and an assist, and Anders Lee, Hudson Faschling, Simon Holmstrom also scored for New York. Jean-Gabriel Pageau had two assists. New York won for just the second time in six games (2-3-1).

Varlamov left with 6:22 remaining and was replaced by Ilya Sorokin, who stopped the only shot he faced the rest of the way. Islanders coach Lane Lambert said he was surprised when Varlamov left the ice and didn’t know the goalie’s status.

“We’ll evaluate him in the next couple of days and see where he’s at,” Lambert said.

Reilly Smith had two power-play goals for the Golden Knights, who had won six of their previous nine games. Vegas, which is 14-2-1 on the road, fell to 8-8 at home.

“You’ve got to take what’s there, and we were willing to do that but not early on,” Vegas coach Bruce Cassidy said. “At home, that’s been our problem is that we’re trying to make plays against every team that comes in early in the game when they’re ready to play, and it’s not working out. It’s what we do well on the road to other teams.”

The Golden Knights lost captain Mark Stone as he was helped off the ice with 8:20 left after being hit by a shot from teammate Phil Kessel. Cassidy said Stone didn’t appear to be seriously injured, but he would know more Sunday.

Knights defenseman Alex Pietrangelo returned after missing his previous nine games because of a serious illness for his 4-year-old daughter, Evelyn. She returned home this week from a Las Vegas hospital after coming down with the flu, which led to encephalitis.

Pietrangelo said he felt comfortable enough with his daughter’s recovery to be back with the Knights. He assisted on Smith’s goal in the third period and later was assessed a tripping penalty. Pietrangelo played a team high 21:45.

The Islanders took a 1-0 lead with 1:02 left in the first period when Anthony Beauvillier found Lee in the slot for his 10th.

New York’s Casey Cizikas was called for boarding at the end of the period, putting the Knights on the power play to open the second. Vegas took advantage at 1:12 with a goal off a rebound by Smith to tie it.

Fasching gave the Islanders the lead right back 3:20 later, and Holmstrom made it 3-1 with 2:23 left in the second. It was the first career goal for Holmstrom, a rookie who was drafted by the Islanders in the first round in 2019 (23rd overall).

Cizikas nearly extended New York’s lead at the end of the second period, but the officials ruled his goal came just after the clock expired.

Smith’s second power-play goal early in the third brought the Knights to 3-2. He has four goals in and six points in the past three games.

Parise and Nelson had empty-netters in the final 90 seconds to seal the win.

“This has been a road trip where we’ve worked really hard and haven’t quite got the results we wanted,” Fasching said. “It’s good to get a ‘W.’”