(SportsRadio 610) - If it's not one thing, it's another with this Texans team.

Two weeks ago, the Texans pulled the plug on Mills.

The honeymoon was over. The tether, tied so tightly to those final five games of the 2021 season finally gave way.

Despite an otherwise forgettable 2021 campaign, some experts, media and fans alike reserved judgment on Mills and the notion of whether he could be the Texans' franchise quarterback.

Based on five games.

The Texans won two of those final three games. Mills completed nearly 69% of his passes during that stretch, throwing for 1,258 yards for a 102.4 rating, including a 9-2 touchdown-to-interception ratio.

It would’ve been 100% easier to say two weeks ago, that the last five games Mills started this season would be his last, but that’s how bad Allen has been.

Meanwhile, before Mills got benched for Allen, the Texans had lost five straight games since beating the Jaguars for their lone victory of the season. Mills completed just 61% of his passes, throwing for 1,096 yards for a 75.5 rating, including a 6-7 touchdown-to-interception ratio during that stretch.

Since Allen has taken over, the Texans offense has looked as pitiful as ever and the turnovers are just as prevalent.

In the two games since Allen has taken over, he’s completed just 59% of his passes, thrown for 416 yards for a 60.6 rating and a 2-4 touchdown-to-interception ratio. 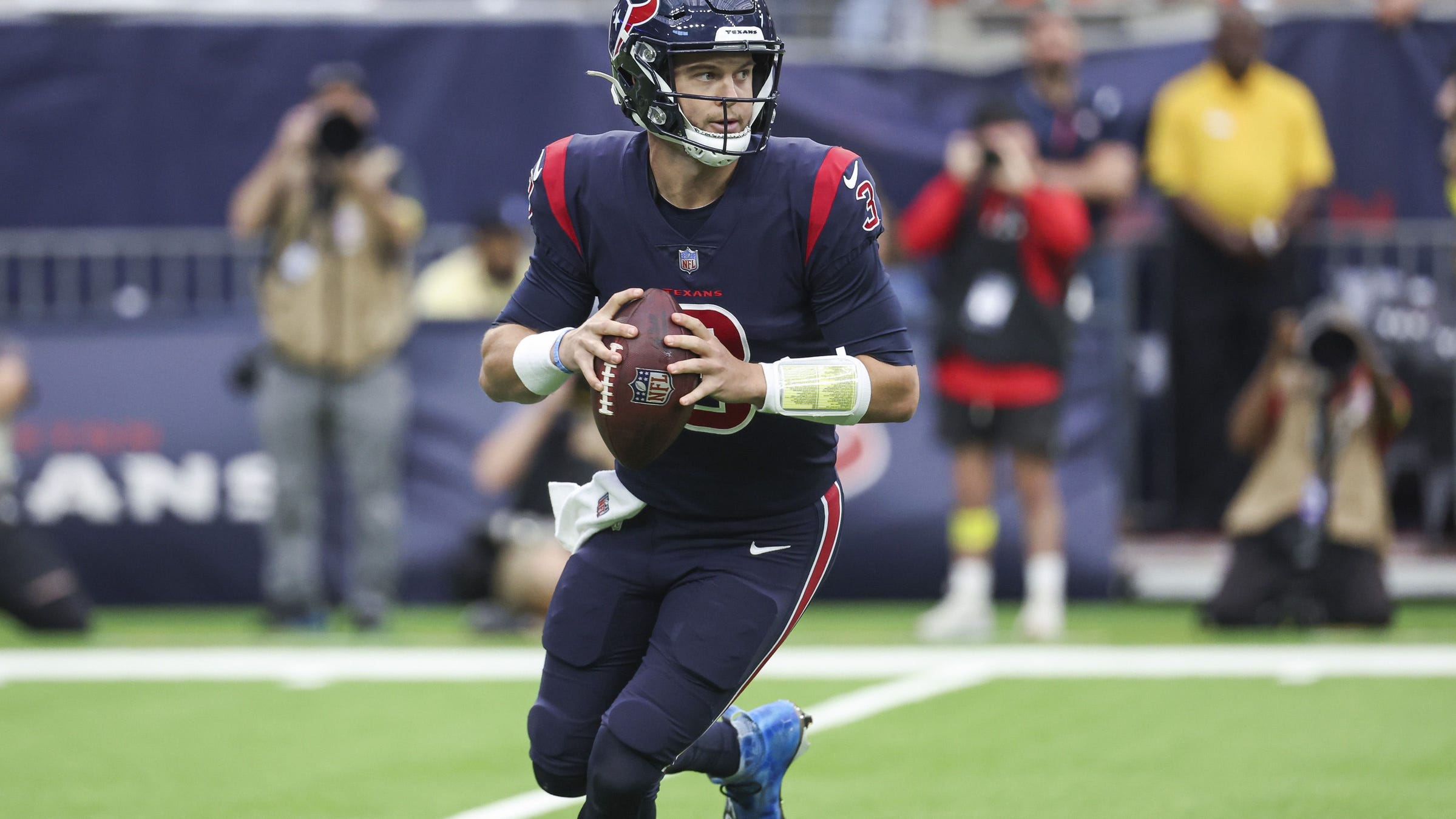 Locker: Texans' Kyle Allen INT on first play of game was one of biggest buzz kills ever

If you can’t run it, throw it

On a given week, if you were to ask offensive coordinator Pep Hamilton what he needs to do to get the offense going he’d tell you some version of about three different things.

Stay balanced. Stay out of obvious passing situations, and finish.

The Texans have struggled mightily all season long to identify what, exactly, obvious is.

What became obvious earlier this season was Rex Burkhead getting the ball on a handoff or check down any time he came into the game to spell Dameon Pierce.

What has become increasingly obvious is that Hamilton’s offense, nor the offensive line, is good to enough to keep them out of obvious passing downs.

Hamilton must have figured that since they can’t keep themselves out of those situations, he’ll just call run plays on 1st-and-30, or 2nd-and-24 situations.

And to really keep the opposing defense on its toes, he’d mix it up and take his best weapon (Dameon Pierce) off of the field on first, second and third and goal situations from the three-yard line.

Hamilton called two pass plays on first and second-and-goal, both of them incompletions by Allen. Then he handed the ball to a guy (Dare Ogunbowale) that’s run it just six times in the last month on third-and-goal.

Hamilton single-handily stifled a 12-play, 72-yard drive that resulted in a turnover on downs after allowing Allen to throw it - TO TROY HAIRSTON - on a 4th-and-1 from the one-yard line.

They might as well have had offensive lineman Charlie Heck run a route instead of block, since he reported as an eligible receiver on the play.

If your offense can’t hack it, ask the defense to do unrealistic things

The defense had a decent day, despite another poor game at slowing the run.

The Texans expected the Browns to try and impose their will as most teams have done this season, and run the ball.

They did. Watson handed it off 31 times, running it seven times himself. Overall, the Browns rushed 38 times for 174 yards, on par with what the Texans, the league's worst run defense typically allows. The running back duo of Nick Chubb and Kareem Hunt combined for 136 yards on 26 carries.

Veteran defensive end Jerry Hughes said after the game that Lovie Smith has preached scoring the football on defense, which is no surprise. That’s something every defensive coordinator wants and says to their unit.

However, what Hughes said needs to be done isn’t realistic.

Not only is it unrealistic, it’s a testimony to just how little faith (rightfully so) Lovie really has in the offense.

“If we’re going to be a winning team, we’ve got to beat the defense we’re playing against,” Hughes said. “So if those guys score points, we’ve got to at least match that. We didn’t, so I think we understand that we've got to just do a little bit more to kind of help our offense out.”

Meanwhile, the offense won’t get the help it needs until April 27th, 2023 and to no one’s dismay, Lovie Smith and Pep Hamilton very likely, won’t have anything to do with it.