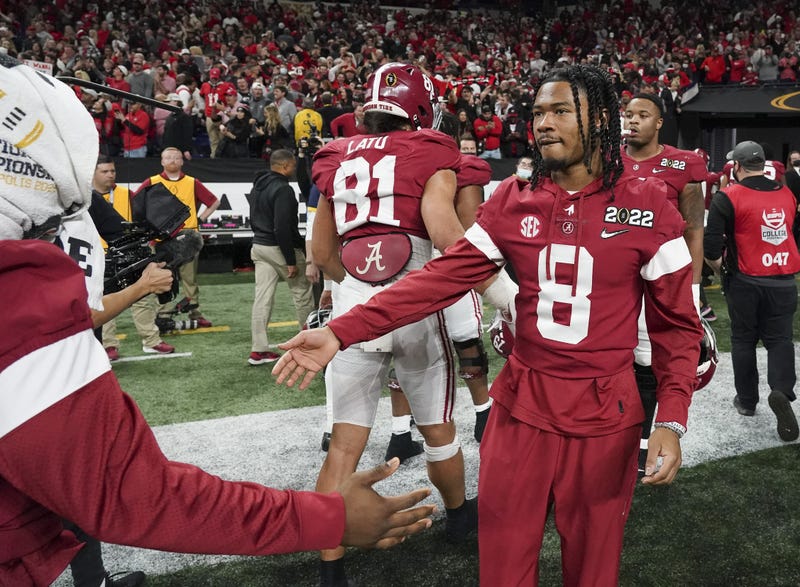 HOUSTON (SportsRadio 610)- After the Texans selected him with the 44th pick of last month's draft, John Metchie III said the rehab of his torn ACL was going well, he was already running, and would be ready to participate in full when training camp starts in July. Texans head coach Lovie Smith offered an update on where things stand.

"We’re in the process of seeing exactly when John would be ready to go," Smith said after Friday's rookie minicamp workout. "Eventually, he will be ready to go. There’s a lot that he can do before that. He’s no 100 percent yet, but in time he will be. I don’t have that timetable set yet, but in the upcoming weeks we’ll be able to tell that a little bit more."

Metchie was on the field with a helmet on Friday without any sort of wrap or brace on his left knee. The only portion of Friday's workout open to reporters was the pre-workout stretch, but Metchie was able to do every exercise and completed a few short sprints. Smith wouldn't say if Metchie's post-draft timetable was accurate, but did say he'll contribute during his rookie season.

"He is going to play this year. It’s all, as much as anything, about the mental preparation, them catching up, getting in the playbook. You’d be surprised the amount of things we ask of young people and what they have to get down.”

Metchie caught 96 passes for 1,142 yards and eight touchdowns with Alabama in 2021. He tore his ACL in the first half of the Crimson Tide's SEC Championship Game win over Georgia.