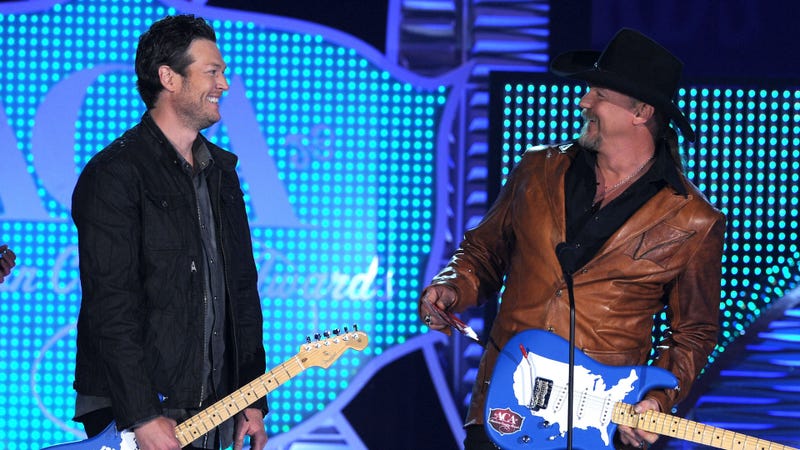 Country fans are already buzzing about the new television drama, Monarch. Taking place in Texas with a storyline surrounding Country music and featuring some of our favorite artists — what’s not to love?

Trace Adkins is just one of the familiar faces fans will see on the show which premiered on FOX September 11. Adkins plays Albie Roman, an iconic Country musician married to Dottie Cantrell, played by Susan Sarandon.

Also scheduled to appear this season as special guests are Shania Twain, Martina McBride, Little Big Town, and Tanya Tucker. While the show clearly isn’t lacking in star power, Adkins says there’s room for more — even Blake Shelton, who he is always quick to swap witty remarks with.

“I think we should bring Blake Shelton” Adkins said when asked by Fox News Digital about who else he’d like to see on the show. “Let him play my stupid younger brother. That’s kind of what he is anyway.”

Don’t feel sorry for Blake -- he took his own opportunity to crack a joke at Adkins, and there was no holding back.

“So excited about @TraceAdkins and @MonarchOnFOX season premiere this Sunday,” Blake tweeted. “I had to prove that he and I truly are friends now that he’s actually going to be famous,” he continued, alongside four photos of him attempting to kiss Trace on the cheek. Blake reposted the same photos a few days later with a special "warning" for fans.

Another reminder before @MonarchOnFOX premieres tomorrow that I actually DO know @TraceAdkins… Although he’s probably going to be an even bigger asshole now with this success.. pic.twitter.com/YmYDdVtcpW

This isn’t the first time these two have playfully taken a swing at one another. Around this same time last year, Trace revealed he didn’t receive an invite to Blake’s very small wedding to Gwen Stefani, but according to him, it was the least of his worries.

“He didn't invite anybody to the wedding,” Trace told Taste Of Country. "I probably wouldn't want to come anyway because I didn't want to witness that woman throw her life away like that," he said. "So, I didn't wanna go, anyway."

Catch new episodes of Monarch every Tuesday at 9/8c on FOX.