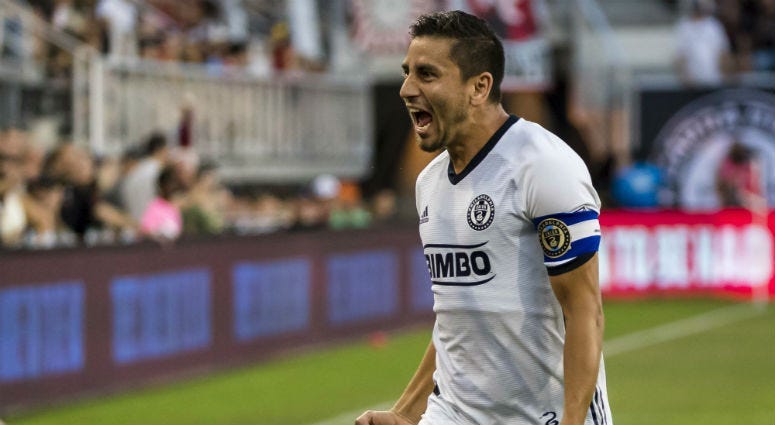 Athletes have often used their platform to make political statements, but rarely have those statements come in the middle of a game.

But that's exactly what Philadelphia Union midfielder Alejandro Bedoya did during the Union's 5-1 win over D.C. United Sunday.

Bedoya scored in the third minute to give the Union the lead, and after celebrating with teammates ran over to an on-field microphone and shouted, "Congress, do something now. End gun violence."

"For me, to see that again happen this morning, another incident in two days, 30 people dying, it’s absurd, man," Bedoya told reporters after the game. “I’m not going to sit idly and watch it happen again. Before I’m an athlete, before I’m a soccer player, I’m a human being first.”

"I’m dropping my kids off at school and I’m looking around thinking about an exit strategy when I’m at the mall, at a movie theater, at a concert or festival down the street, any big gathering. Something’s gotta be done. It’s gotten to the point where we’ve almost become numb to it. That’s a big problem."

"I’m on Alejandro’s team on the Philadelphia Union and I’m on Alejandro’s team in support of his views on gun control," said Curtin. "Again, 250 shootings this year … It’s outrageous, things need to change in this country for sure and I’ll support anyone who speaks their mind and is intelligent and informed on it anytime. That’s what Alejandro is, he’s passionate, he cares."

“Ale poignantly voiced what so many Americans are feeling right now, which is enormous frustration at our elected leaders’ failure to act to protect their citizens.”

“On this tragic weekend, on behalf of all MLS players I want to express my full support for Alejandro Bedoya’s exercise of free speech," Foose said in a statement. "To paraphrase his post-game comments, before our members are soccer players, they are people."

"Ale poignantly voiced what so many Americans are feeling right now, which is enormous frustration at our elected leaders’ failure to act to protect their citizens."

Seeing more thoughts and prayers bullshit.Words without actions are just worthless. America, it seems, is becoming a dystopian society.Do something!!! Enough!!!