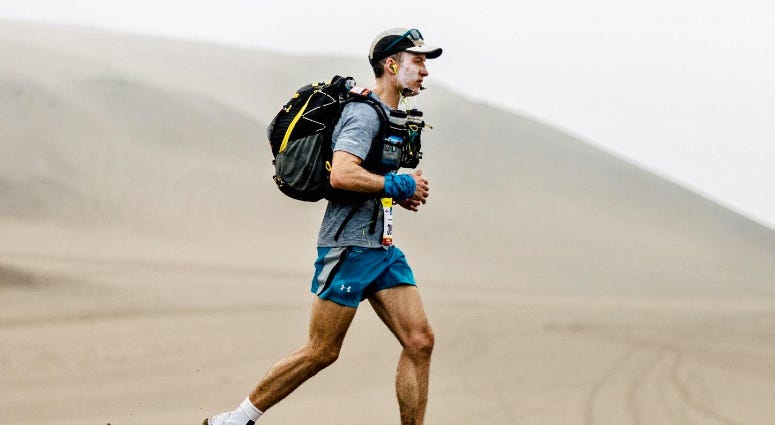 Corey Cappelloni tired of running ultramarathons. Finishing the final 10 miles of a 2018 race with a stress fracture created thoughts of retirement for the 45-year-old runner. But the District refugee worker, who was the first American to complete the Marathon des Sables trilogy, has opted for one more run. His 98-year-old grandmother Ruth Andres is battling loneliness at a Scranton, Pa. facility while recovering from a fall. Cappelloni will run 220 miles just to see her outside the window while raising $22,000 for caregivers at the Allied Services Skilled Nursing and Rehabilitation Center. "She was becoming sad and lonely and scared, so we're trying to find ways to uplift her," Cappelloni said. "This would really keep her spirits up." "Run for Ruth" begins Friday from Cappelloni's District home in a series of seven ultramarathons over seven days along the back roads of Maryland and Pennsylvania. It's not a direct route to avoid traffic, but the 30-plus mile daily runs will culminate with a rap on Andres' window and hopefully a smile from "Nana." "She's always been there for me as a second mom," Cappelloni said. "This is what I'm doing for her. Symbolically. I can't give her a hug. I'm just going to wave to her, but it's uplifting to her and the people at Allied. The staff is dealing with a tremendous amount of stress so I'm doing it for them as well. My grandmother praises the staff. They know (I'm) putting my body through hell to raise awareness for them." It won't be easy for the 6-foot-1, 160-pound Cappelloni, despite six years of running long distances. He'll consume 5,000 to 6,000 calories daily, plus two liters of water while running five to eight hours, daily. Still, a support team transporting everything makes it easier than his Marathon des Sables adventures when carrying supplies in a backpack through the Sahara Desert. "The biggest challenge is pacing myself," he said. "Refueling is a challenge. The biggest concern is avoiding injuries. The Sahara race, the longest stage is 58 miles, and at mile 48, I started developing a stress fracture, so I had to walk. That was slow, painful. I don't want to go there again." This is the longest stretch in his career, surpassing 156 miles over six days in southern Morocco, where he was dreaming of food while running over sand. "They talk about a runner's high when you go through these races, you get the endorphins," he said. "It's meditative for the rest of the day. Runners do get addicted to the endorphins.

"Running these long distances, the only thing you need to do is put one foot in front of the other. Golf and other sports, you need to develop a skill. Here, the skill is straight forward." Cappelloni will start early to avoid the peak heat, and weigh-in daily in expecting to lose 10 pounds. He learned in his first ultramarathon to never sit down for a break, instead adjusting his pace while continuing.

But this is an ending quest of sorts.

"After my last three or four races, I said they were my last one and everyone rolls their eyes," he said. "But I don't know. I can't do them forever. I wouldn't mind doing shorter, half-marathon races." For now, Cappelloni is off to grandmother's house by running over the river and through the woods.