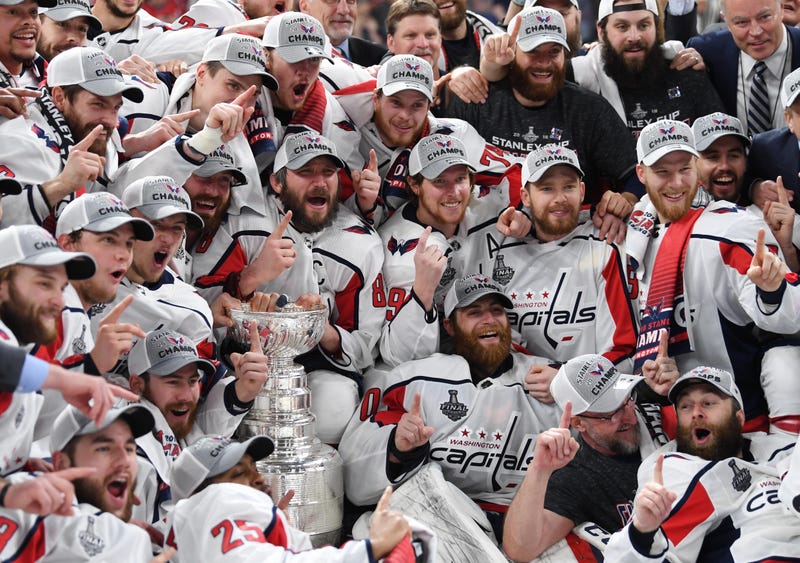 On the eve of the 2020s, Washington, D.C., has a lot to be proud of as a sports town. In the decades since the Washington Redskins’ dynasty ended, the District has struggled to prove it can stand toe-to-toe with the Bostons, New Yorks and Pittsburghs of the world.

Thanks to some of the biggest sports stories of the decade, D.C. can now lay rightful claim to being one of the best sports cities in America.

In reverse order, here are the Top-10 D.C. sports stories of the decade. The criteria for some are obvious, while other stories were significant because they changed the course of fate for a team, one way or the other.

10. Sports betting legalized in Washington
While this story has very little impact on the 2010s, it will completely transform the way that sports are consumed in the next decade and beyond. Imagine a world in which real-time odds and prop bets are broadcast from every sports arena, and available for fans betting online (even if it’s called prediction games or daily fantasy sports). The U.S. Supreme Court is responsible for opening the door on sports gambling across America, but D.C. was one of the early adopters of legislation and a process to support sports gambling in the District.
By becoming one of the first places to embrace full-on sports betting, estimates show that D.C. could earn $100 million in additional tax revenue over the first four years of operation. With the support of Monumental Sports owner Ted Leonsis, look for the Capital One Arena in the heart of D.C. to become the mecca for sports betting in the District.
9. Redskins salary cap penalty

Heading into a contentious 2011 NFL Collective Bargaining Agreement negotiation, the league and players’ association went through a so-called “uncapped” year in 2010, where teams were theoretically unconstrained by the league salary cap. However, in a move that probably amounts to collusion, teams agreed to honor the spirit of a salary cap and not spend wildly during that season.

The Redskins and the Dallas Cowboys, however, renegotiated key player contracts that dumped extra salary into that season. It was not until 2012, once the ink had dried on the new CBA, that the league offices punished the two teams. For the Redskins, that meant a $36 million cap penalty spread over two years, announced on the eve of free agency.

Given the language of the new CBA, the players’ association had no recourse to the sue the league on the teams’ behalves, even though they likely would have won. This drastically changed the Redskins’ spending plans, and when combined with the draft picks traded for Robert Griffin III, undermined the team’s ability to compete. It is also said to have created a permanent rift between Mike Shanahan and Bruce Allen, with the head coach getting fired after the 2013 season.
8. Audi Field opens in downtown D.C.
After years of playing at the cavernous RFK Stadium, MLS, D.C. United and the city council committed to building a new, 20,000-seat soccer stadium at Buzzard Point. This makes it one of the nicest venues in MLS, and helped attract international superstar Wayne Rooney to D.C. Even if soccer isn’t your thing, the stadium creates additional sporting and entertainment opportunities in D.C., including professional lacrosse and the newly-reformed XFL football league.
7. RFK Stadium set to be demolished
While this demolition is not expected until 2021, the end of an era has already arrived. After the Washington Nationals and D.C. United moved out of RFK Stadium for new, state-of-the-art facilities, RFK no longer had a home team. With tremendous costs associated with keeping it available for one-off sporting events, the logical move was made to demolish it and prep the site for the next phase of use.

This use could be another football stadium, as the Redskins’ lease at FedEx Field expires in 2027. Either way, it will be a sad day in D.C. when the seats that bounced under the weight of excited fans collapse into rubble.

Before the Nats or Washington Capitals won championships, they put Nationals Park at the center of the sports universe. In 2015, the Caps hosted the Chicago Blackhawks for the Winter Classic, in front of nearly 43,000 hockey fans, in a rink that was built over the grass and dirt playing surface.

Fittingly, former Blackhawk Troy Brouwer scored the go-ahead goal for the Caps with seconds left in regulation for a memorable D.C. win. Three years later, D.C. hosted the All-Star Week festivities for the first time since 1969, highlighted by Bryce Harper’s iconic Home Run Derby win. Wearing the city’s flag as a bandana, Harper was never closer to the hearts of D.C. sports fans than when he defeated Kyle Schwarber, 19-18, in the final round.
5. Washington Mystics win the WNBA Championship

All champions belong on this list, but the Mystics are a unique story for a number of reasons. Before adding Elena Delle Donne in 2017, the Mystics wallowed in obscurity, even with talented pieces like Emma Meesseman and Natasha Cloud.

Armed with a very talented core, the Mystics won a championship and brought needed attention to women’s basketball in the district. Look for the team’s popularity to grow in the coming years and for the team’s championship parade in the spring to be a galvanizing moment for basketball in D.C.
4. Ending the Bruce Allen and Ernie Grunfeld eras
Even with the rise of “cancel culture,” it’s hard to cheer for someone getting fired--unless they really deserve it. Bruce Allen kicked off his tenure with the Redskins almost exactly 10 years ago and finally got fired on the final Monday of the decade, a move that was long overdue and still somewhat unexpected.

During his tenure, the team went 62-100-1 in the regular season, cycling through coaches, quarterbacks and other scapegoats in the front office. His enduring legacy will be his own assessments, that the team was “winning off the field,” and that “the (team) culture is actually damn good.”

Ernie Grunfeld had similar results, going 568-724 over 16 seasons at the helm of the Washington Wizards. Under Grunfeld’s direction, the Wizards failed to reach 50 wins in any season or advance past the second round of the playoffs. Yet, when he was finally fired, he was the second-longest-tenured general manager in team history and one of the longest active GMs in the NBA. Both moves are expected to be addition by subtraction to their respective teams.
3. Robert Griffin III, Bryce Harper and John Wall take D.C. by storm

Remember #RG3toDC? I was working for Redskins.com when that started, running what used to be the official Redskins Blog. I remember the day that Griffin first visited Redskins Park before the draft and got to shake the Heisman Trophy winner’s hand outside of the team’s weight room.

I was standing in a noisy bar with some of my colleagues as the breaking news banner on ESPN showed that the Redskins had traded up to the second overall pick in the draft. And I will never forget how the first night of the 2012 NFL Draft turned into a nonstop party, until he crumpled under a torn ACL in the Wild Card round of the playoffs less than a year later. At that point, the dream was over, whether we knew it or not at the time.

Hype and marketing aside, what each of these players signified was hope and identity for struggling franchises. The Redskins were coming off of a season in which John Beck started multiple games under center.

The Washington Nationals drafted Bryce Harper at a time when they were still trying to live down the “Natinals” fiasco. John Wall represented a new chapter for the Wizards, who had never recovered from the Gilbert Arenas fallout. These three players were supposed to be to D.C. sports what Alex Ovechkin has been for the Caps--a legendary player and face of the franchise.

Sadly, it was not to be for RG3, who never recovered from injury. Bryce Harper chose to leave, chasing a payday in Philadelphia. The book is not quite finished on Wall, who still has a chance to be part of something great in D.C. Regardless, these three dominated D.C. sports coverage over the last decade, and leave a mixed legacy behind.

Despite having arguably the best hockey player in the world, in Alex Ovechkin, the Caps had always come up just short in the Stanley Cup Playoffs. In fact, the franchise probably had better rosters than the 2017-18 team but never had the right combination of talent.

After falling behind 2-0 to the Columbus Blue Jackets in the first round of the playoffs, the Caps flipped a switch, winning four-straight to advance. Against the hated Pittsburgh Penguins, they won again in six games, this time with an overtime goal by Evgeny Kuznetsov. This sealed the Caps’ first trip to the conference finals in 20 years, and their postseason win over Pittsburgh in 24 years. All of a sudden, this was a team of destiny.

"THE WORDS THAT D.C. FANS HAVE BEEN WAITING TO HEAR SINCE 1974! THE WASHINGTON CAPITALS ARE THE 2018 STANLEY CUP CHAMPIONS! IT'S NOT A DREAM! IT'S NOT A DESERT MIRAGE!" @WaltonCaps' WITH THE #STANLEYCUP GAME-WINNING CALL pic.twitter.com/2gYtPHpfZl

In the conference finals, they vanquished the Tampa Bay Lightning with an emphatic 4-0 win in Game 7 and prepared to host the upstart Las Vegas Golden Knights in the Stanley Cup Finals. It took only five games to dispose of the Golden Knights, which they did in Las Vegas on May 23. When the Caps returned home for a victory parade, they got a heroes’ welcome from a city starved of a major championship since the Redskins in 1992.

1. Washington Nationals win the World Series
Much like the Caps in 2018, the 2019 Nats went on a run at a time when many thought their window had closed. Spring Training started with Bryce Harper signing with the Philadelphia Phillies, before the Nats got off to a 19-31 start.
Despite injuries ravaging the roster, manager Dave Martinez was widely believed to be on thin ice. It wasn’t until August when the team finally seized control of the Wild Card race, riding the rallying anthems of “Baby Shark” (thanks to Gerardo Parra) and “Calma” (thanks to Brian Dozier) to a 93-69 record.

In the playoffs, they needed comeback wins over the Milwaukee Brewers in the Wild Card game and Los Angeles Dodgers in the divisional round before finally advancing to the NLCS.

With the bullpen in shambles, Martinez utilized his trio of aces to fill in innings and shut down opposing hitters. The red-hot St. Louis Cardinals ran into a D.C. buzzsaw, as the Nats swept the Cards in four games to advance to their first World Series.

Leveraging the bats of Anthony Rendon, Juan Soto and Howie Kendrick, the Nats slugged their way past the Houston Astros in seven games. It was the first time in MLB history that a home team did not win a single game in the World Series, and 94-year-old team owner Ted Lerner was on the field in Houston as D.C. won its first World Series since 1924. It was the culmination of decades of work and billions of dollars, but D.C. was officially a baseball town again.
Brian Tinsman has covered D.C. sports since 2011, both from the team marketing and skeptical fan perspectives. Tweet your criticisms @Brian_Tinsman.