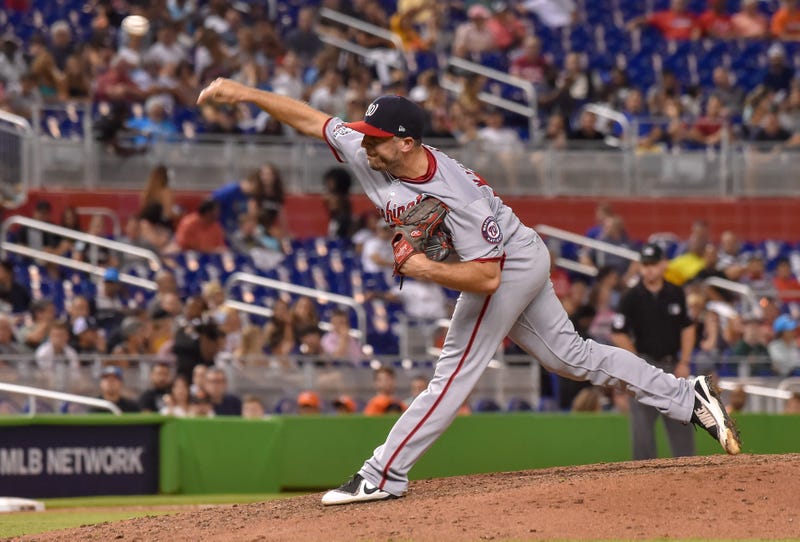 Former Nationals reliever Brandon Kintzler, one day after his surprise trade to the Cubs, responded to accusations of being a clubhouse snitch.

Two reports in as many weeks have cast Washington's clubhouse in a negative light. One, from Chelsea Janes on July 19, questioned first-year manager Dave Martinez's handling of the pitching staff. That report, citing "on- and off-the-record conversations," expressed grumblings that Martinez hasn't properly managed his relievers' workloads.

Another scathing report from Jeff Passan of Yahoo on Monday cited anonymous sources who characterized Washington's clubhouse as "a mess," one that's fostered an environment which favors stars while leaving a number of other players feeling marginalized. A series of Washington Post reports after the deadline on Tuesday indicated Kintzler had been identified by the Nationals as a leaker.

"I've never talked to that Jeff Passan guy in my life, so that’s an interesting accusation," Kintzler told 106.7 The Fan's Grant & Danny, when asked point-blank about the accusations on Wednesday. "I don't know. I know for a fact that someone got him to admit that his source was not a player, so it wasn't me. I've never talked to that guy in my life."

Asked if he was bothered by the accusations, Kintzler said, “In the beginning you care, because it’s your character, and I work really hard, I always feel like, to be a good teammate."

"I always thought I was a good teammate, and everyone in that clubhouse thought I was a good teammate," he said. "When someone tries to say something about your character as far as how you are in a clubhouse, that hurts a little bit. But it’s just an opinion of one person, and they can think what they want. I thought I did a good job there, and new beginnings today. And it is what it is, put it behind me, and can’t wait to face them next week."

"I just wanted to win, man. And I felt like if I ever saw something or if someone asked me my opinion about what I thought I saw, I thought I could help. Or you bring in other people and we all – me and Scherzer would always talk about pitchers and the way we can help guys and what we think," he said.

"Sometimes, you just don’t always want to leave it to a pitching coach, because he’s got to take care of 13 guys. And sometimes, the little things I think, a lot of times your co-pitchers are the best coaches you can get because we watch each other more than anyone. We play catch with each other. I just wanted to win, and I felt like with me and Tanner being very similar and you see certain things with Gio, you just help ‘em out a little bit. Maybe try this. Sometimes it clicks, and obviously Tanner’s on a nice little run and hopefully Gio keeps turning it around."

Kintzler never imagined his name would come up on deadline day, saying the trade left him feeling shell-shocked.

"I had zero idea. Last thing I thought going to the field was I'd be the one packing and going to somewhere else," he told 106.7 The Fan. "But it's what we figure out in this business, that it's a crazy business and anything can happen."

"Probably took me all night to take it all in," he said. "But today's a new day, and gotta move on. Go help someone else."

In his interview with The Sports Junkies on Wednesday, Nats GM Mike Rizzo named a number of reasons for trading Kintzler, namely their improved bullpen depth over the past year, help that’s on the way, and that Washington’s scouts liked the prospect they received in return, Single-A pitcher Jhon Romero.Rizzo also added, “We want players who care about the name on the front of the jersey more than the name on the back of the jersey, and that's a demand that I make of them, and if we don't get that, then we have an issue.”In addition to trading Kintzler, the Nationals on Wednesday designated reliever Shawn Kelley for assignment, after a public outburst on the mound in Tuesday's win, which Rizzo would characterize as "disrespectful to the organization and the name on the front of the jersey."
Follow Josh Luckenbaugh and 106.7 The Fan on Twitter.