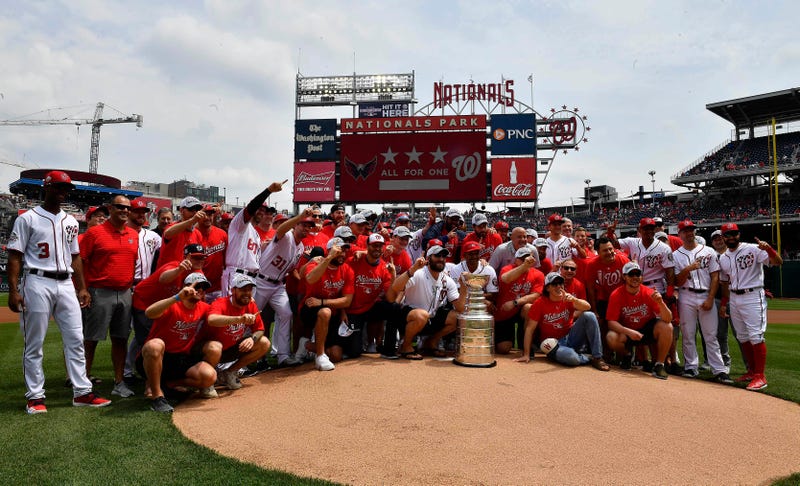 The Washington Capitals are now the hot team in town following their Stanley Cup championship. More than 100,000 fans will watch the Capitals’ victory parade down the National Mall on Tuesday.

Actually, that’s just a guess that will probably fall way short. After all, some 50,000 filled the Penn Quarter on Thursday to watch the Caps win the title despite the game being played in Las Vegas. Let’s just say everybody’s taking a long lunch for the parade.

This town has gone bonkers over its first winner since the Redskins title in Jan. 1992. Alexander Ovechkin and Co. have done their best Riggo and Hogs impression with a three-day bender following the title. From rooftops in Clarendon to swimming in Georgetown fountains, Ovi and the gang charmed fans with their roguish re-enactment of Vikings celebrating an invasion.

But can a hockey team really become more popular than an NFL club that owned the market for so long? Probably not in the long term. Winning provides a temporary bump. In this case, maybe a year or two before the Caps need to keep winning or slip in local rankings.

Still, it’s not like the Redskins have done anything since their 1991 championship to reverse the steady fan erosion over the past decade that has turned FedEx Field into a half-empty shell filled with visiting fans. A few division titles and one playoff win under owner Dan Snyder has a generation of young Washingtonians tired of hearing the stories while seeing little living proof. That is, until the Caps showed winning a title is possible.

In 2013, I was asked how much the Redskins controlled the market. Of 100 marbles in a jar, I said, about 70 are Redskins and about 10 each for the Nats, Wiz and Caps. Nowadays, I’d say the Redskins are down to 50 percent and sliding. Young fans like fantasy teams better than their own pro clubs and with sports gambling now legalized nationwide, everything about fandom will change.

The Caps are rising. The Nationals are gaining on the Redskins, too. If the Wiz could ever stop undermining themselves, they’d also right there. Indeed, this town would be pretty divided over fandom.

For now, the Caps own Constitution Ave. with a parade passing the White House. Meanwhile, the Redskins can only ride on past titles for so long.