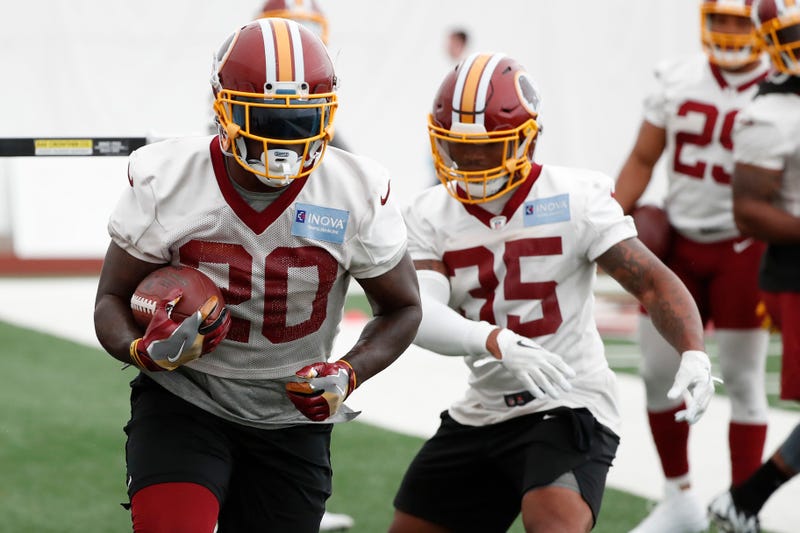 Don't be quick to dismiss Redskins running back Rob Kelley.

Last year's opening starter fell hard and fast last season, playing only seven games for a mere 174 yards before placed on injured reserve with a sprained MCL. The 3.1 yards per carry made him invisible, even before getting hurt, and the 2016 free agent became an afterthought when entering training camp.

After all, the Redskins will probably only carry four running backs. Rookie Derrius Guice and Chris Thompson are locks to make the roster. So is Samaje Perine, despite a disappointing rookie season. That leaves Kelley to outlast several prospects.

"I think the hurdles just make me a better player," Kelley said. "It's the team's job to keep on getting competition, to keep pushing the envelope ... (I've) still got to work as hard as I can."

Kelley lost 20 pounds since his rookie days of "Fat Rob," including nearly one pound of dreadlocks shorn over the offseason. His offseason camps showed renewed energy and training camp has seen Kelley improve his pass catching, including one at his fingertips on Monday that he held on to for a long gain. That pass would have been on the ground last year.

Kelley is also working with kickoff return and punt protection units on special teams trying to enhance his resume.

"If you're not really in that competition of being like a starter, I think special teams is a place where you want to be," he said. "Even if you win a competition, I think it's also a good backup plan to go out and perform on special teams."

But Kelley's biggest reason to remain on the roster is his pass catching. In the past, bringing in Chris Thompson tipped defenses to the play. Now Kelley remains an option to confuse opponents.

"Most definitely, I think it's very, very valuable to be a pass-catching back," he said. "You kind of ... close the offense down basically if you can't catch the ball."

Whether Kelley is caught in a numbers crunch come cutdown day depends on the next few weeks. At least, Kelley is increasing his odds of staying.

"I can't pick who wins and loses the competition," he said. "It's up to the coaches and stuff like that. So, control what you can control. There's always a competition [whether] you think it or not."