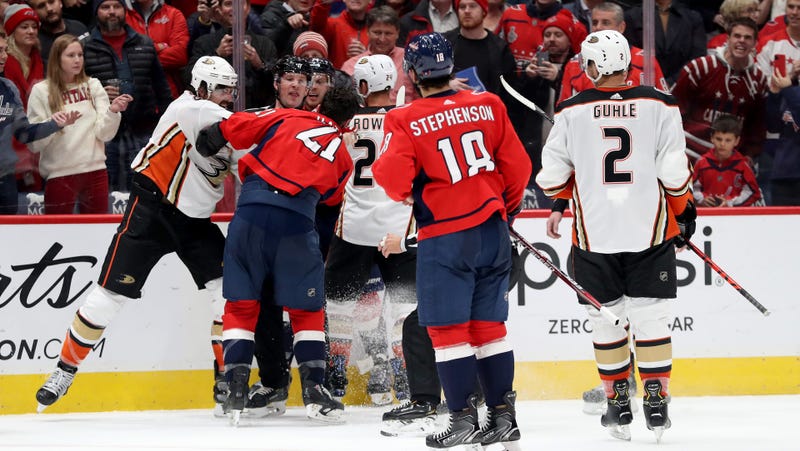 The best team in hockey, the Washington Capitals, won again Monday night beating the Anaheim Ducks, 5-2, at Capital One Arena, but the game was overshadowed by a brawl toward the end of the second period which finished with a side of saliva.

The donnybrook began when Caps forward Brendan Leipsic got into it with multiple Ducks below the goal line following a clean hit after being crosschecked by a Ducks' defenseman. Washington, ever the competitors, finished the play with a goal before the fighting began in earnest.
The incident was coming to a close when Anaheim’s Erik Gudbranson, who was entangled with the Caps' Garnet Hathaway, sucker punched the Washington forward as an official attempted to keep them apart. Hathaway then spit on Gudbranson.

there's a lot going on here and somewhere within it Stephenson scored pic.twitter.com/pSGjlMtEpI

what people behind the glass saw pic.twitter.com/TYygKEI8UJ

Hathaway was given a five minute major for fighting and a match penalty for spitting. And his action will be reviewed by either the NHL’s Department of Player Safety or Hockey Operations Department. And he could be suspended.

Capitals head coach Todd Reirden defended the character of Hathaway after the game.

"I have a lot of time for Garnet Hathaway," Reirden said. "He's a standup guy, a first-class guy. He was getting punched by a couple of different guys at once and lost control of his emotion."

Reirden did add spitting was crossing a line.

"It's something that there's no place for in the league. So that's disappointing. He feels terrible about it. He didn't have to talk to anybody today but he was the first one to say, 'I want to own up for what I did.' He's not happy about it. That's who he is. He made a mistake and we'll see where it goes tomorrow," Reirden said after the game.

Hathaway admitted to spitting after the game, he told the media, “spit came out of my mouth after I got sucker punched, and it went onto him.”

“It has no place,” Hathaway added. “It was an emotional play by me. You don’t plan any of that stuff in your head, and it was a quick reaction and unfortunately the wrong one for me to a sucker punch.”

Here's how Hathaway saw it go down. pic.twitter.com/b7PhGT7ZJA

The Ducks had a bit stronger response.

"It’s just disrespectful,” Gudbranson said about being spit on by Hathaway. “I mean, we’re competing. That’s fine. I’ve got no problem with guys fighting. That’s what this game is all about, guys fighting to win hockey games. And sometimes that’s what happens. But going to that level is wrong.”

"That's about as low as you dig a pit, really," Gudbranson said. "It's a bad thing to do. It's something you just don't do in a game, and he did it."