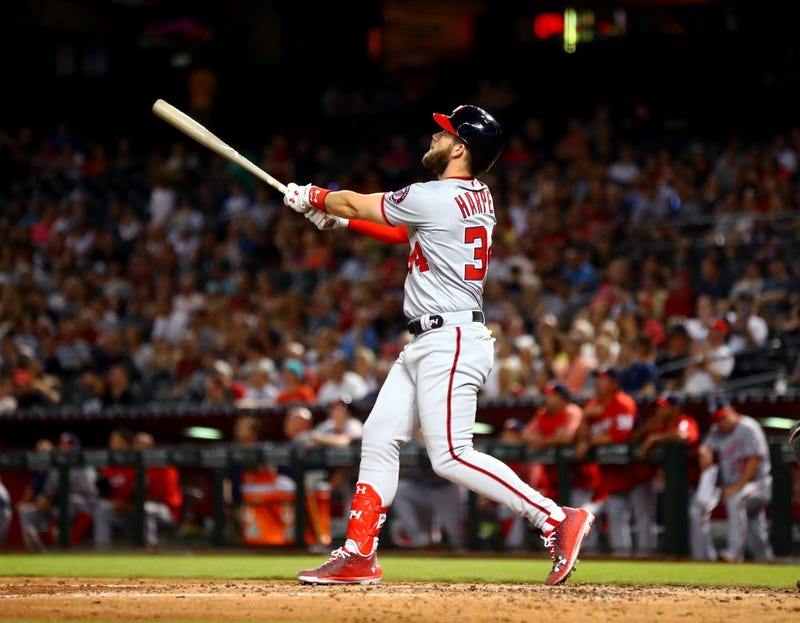 Bryce Harper ranked second in Monday’s Home Run Derby merits. Just one question – has legalized sports betting started yet? Because I have a few Benjamin Franklins ready to play.

The Washington Nationals outfielder will break the derby record for most home runs. After all, walks and homers is what he specializes in this season. Let someone of his choosing actually groove every pitch and hold on to your drinks in the Red Loft Bar, because baseballs are coming your way.

This is Harper's showcase for free agency. A chance to start the bidding for one of the game's stars come season's end. That Harper is batting only .213, and the Nats are .500 and looking doubtful for the postseason, may dampen thoughts of a $400 million deal. But let Harper crank a few dozen balls in front of every baseball exec nationwide and the bidding bell will start ringing from the New York Yankees to the Los Angeles Dodgers.

Reputations are made on the national stage, and since the Nats don't look good for October, this is the time for Harper to make his move. Show the power and grit when opponents aren't starving his strike zone. Display that talent everyone swears is better than the numbers and the money will flow.

Certainly, Harper will be the crowd favorite. The majority of fans will be locals, though plenty of people nationwide are coming to town. Harper wants to repay fans for seven years of loyalty, even if he's one foot out the door and the other in a bank vault. While Harper could re-sign as a free agent, chances grow slimmer with every Las Vegas Knights memory.

Harper faces Freddie Freeman in the first round. The Atlanta first baseman has been a deep ball regular for 2½ seasons, but Harper should be a 3 to 1 favorite.

The second round brings either Max Muncy or Javier Baez. Muncy has 21 homers for the Dodgers while Baez has 18 for the Chicago Cubs. Figure Muncy gets hot to face Harper in the second round. It's going to be close, but Harper wins by two.

Now the finals. Jesus Aguilar is the No. 1 seed. The Milwaukee Brewer probably proves it to face Harper. He's hitting for power and average this season.

Harper should go first in the final. Go for the knockout. Put the pressure on Aguilar to beat a big number.

But the cheers will ultimately be for Harper. After all, it's his town – for now.