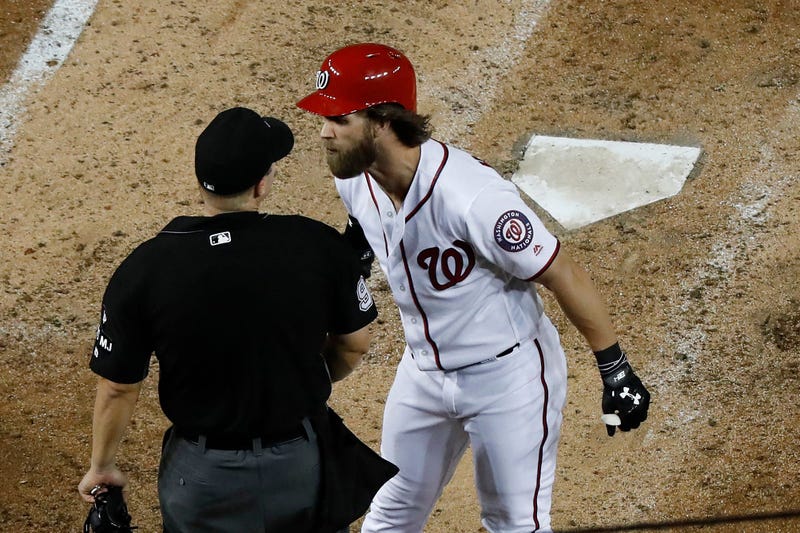 If Wednesday is indeed Bryce Harper's last home game as a Washington National, he leaves behind plenty of memories, good, bad and even ugly. And for better or for worse, a major part of Harper's legacy in D.C. will be his amazing ejections.

Harper has turned getting tossed into an art form, ejected 11 times since his call-up to the majors in 2012. And when an ump gives him the old heave-ho, Harper leaves an expletive-filled tapestry in his wake, his furious outbursts worth the price of admission on their own.

We've compiled a list of every time Harper's been tossed — an ejection encyclopedia, if you will — so you can re-live each of his colorful outbursts with the Nats if he does depart in the offseason. Here it is, presented in chronological order.

Ejection #1: Aug. 29, 2012. Umpire: CB Bucknor
The one that started it all. Harper grounded out into a 3-6-3 double play against the Marlins, and slammed his helmet down in frustration. First base umpire CB Bucknor, commonly voted one of the worst umps in all of baseball, did not take kindly to Harper showing emotion of any kind, and tossed the soon-to-be NL Rookie of the Year.

Maybe Bucknor thought Harper's helmet toss was directed at him for calling him out on a close play at first, maybe he just felt the need to remind the rookie who was in charge. Regardless, fans can understand why Harper has had a...complicated relationship with umpires after such a needless ejection.

Harper hadn't honed his fury skills just yet, so this first ejection did not include the typical expletive explosion. However, Davey Johnson certainly makes his feelings known to Bucknor.

Some may say Harper's always looking to get ejected with how he wears his emotions on his sleeve, but as with the Bucknor call, the umpire here seems like the eager one to see Harper tossed.

During a game against the Pirates, third base ump John Hirschbeck rung up Harper on a two-strike check swing. When the young slugger dared to voice his disagreement, Hirschbeck began walking down the third base line and yelling at Harper, his hands raised in the air.

Harper didn't appear to say or do anything too outlandish, but uncomfortable with having his authority even remotely questioned, Hirschbeck sent him to the clubhouse for good. "Hirschbeck was just dying to throw Harper out there, and he eventually did," MASN announcer Bob Carpenter said on the broadcast.

Back at the scene of his first "crime," Miami, this is the first iteration of the typical Harper ejection. The formula: disagree with a strike three call, let the home plate umpire know, ump gives the ejection signal, continue yelling until ushered back to the dugout.

Unsatisfied with home plate umpire Hunter Wendelstedt's strike zone for most of the game, Harper finally had enough after he was called out on an outside fastball in the eighth inning. "There's no way!" Harper can be heard screaming as he turns to Wendelstedt, throwing his arms up and swinging his bat through the air.

"That's twice!" Harper went on to say, Wendelstedt quickly tossing the furious outfielder. After his third ejection in less than two MLB seasons, Harper's reputation as an umpire antagonist, whether deserving or not, was already secure.

Once again, this one involves a disputed check swing. Home plate umpire Rob Drake ruled Harper went around, and Harper...well...disagreed.

Unlike the Hirschbeck incident, it's hard to argue with Drake tossing Harper here. Harper gets right in the ump's face, irate Drake didn't at least check with the third base umpire. Oh, the irony.

Credit should be given to Matt Williams, who also got tossed defending his player. However, a year later, Williams notoriously would send Jonathan Papelbon back into a game after trying to choke Harper in the dugout. "He's our closer," after all.

This one is wacky with a curly W. Just a week removed from his previous ejection, Harper was tossed by home plate ump Marvin Hudson for, um, not standing close enough to the batter's box during a stoppage in play.

Hudson had abandoned his own post to exchange words with Williams, who was voicing his displeasure with Hudson's strike zone from the dugout. Harper naturally left the batter's box, which Hudson did not take kindly to.

This one also includes a bonus Williams ejection, who stormed out of the dugout once Harper was tossed. He could be a Rockette with those high kicks of the dirt!

This one might be the most significant Harper ejection of all, given its playoff implications. The Nats were in New York for a crucial three-game series with the Mets, Washington leading New York by three games in the NL East standings.

The series opener went to extras, and Harper stepped to the plate in the 11th with a chance to break the 1-1 deadlock. However, Harper lost his cool after a (you guessed it) called third strike on the outside, and Jerry Meals tossed him, to the delight of the Mets crowd.

Maybe it didn't really have an impact on what happened next, but an inning after Harper's ejection, Wilmer Flores did this.

The Mets went on to sweep the series, and ultimately overtook the Nats in the standings and won the division. The Nats, meanwhile, missed out on the playoffs, and Williams was canned just a year after winning NL Manager of the Year.

This one is unique because Harper wasn't even on the field when he was tossed!

With the score tied 4-4 in the bottom of the ninth, home plate umpire Brain Knight rung up Danny Espinosa on a called third strike, and Harper began yelling at Knight from the dugout. As Espinosa walked away from the plate, Knight ejected Harper, the slugger bursting onto the top step in frustration.

Two batters later, Clint Robinson hit a walk-off home run, and as Harper mobbed Robinson at home plate with his teammates, he had a special message for Knight. I'll let you read his lips.

After getting ejected earlier in the game, Bryce Harper gave the umpire a piece of his mind before celebrating.https://t.co/IqPsp2TcDe

We've got another extra innings ejection here, Harper unloading on home plate ump Mike Winters for a (say it with me now) outside called third strike in the bottom of the tenth against the Rockies, the score tied 4-4. And unlike his first career ejection, Harper's helmet toss was undeniably directed at the umpire this time.

"That can't happen," MASN commentator F.P. Santangelo remarked as Harper walked back to the dugout afterwards, the Nats having used several bench players earlier in the game. Indeed, the Nats ended up losing the game 9-4, Washington unable to push a winning run across.

This one will not be remembered as a Bryce Harper ejection, but as the Bryce Harper brawl with Hunter Strickland. After Harper hit two home runs off him in the playoffs three years prior, Strickland drilled Harper with a fastball to the torso. Harper pointed his bat at Strickland, tossed it to the side, and the fight was on.

The benches-clearing melee resulted in a four-game suspension for Harper, who was obviously tossed for charging the mound, as was Strickland for his petty plunking.

Here's something you don't see every day: Bryce Harper getting ejected on a swinging strikeout!

Unimpressed with Chris Segal's strike zone throughout the night, Harper reached his boiling point in the eighth inning. He struck out swinging, kicked the dirt Matt Williams style, then slammed his bat to the ground and made his feelings known to Segal. As if they weren't clear already.

Harper's latest ejection was similar to many of his previous ones: arguing balls and strikes, emotional reaction, et cetera. But there's one key difference: the pitch was inside!

Additionally, it didn't appear that Harper did too much to deserve this one. He was walking back to the dugout, muttering over his shoulder, and home plate ump D.J. Reyburn decided Harper said something so egregious he couldn't let him back on the field. Some things never change.

What must have been extra vexing for Harper was the fact he'd set a goal for himself not to get ejected in 2018.

"That's my biggest thing this year, I don't wanna get tossed," Harper told MLB.com's Jamal Collier, five days before Reyburn ejected him. "I think I go to the edge and kind of quiet up."

We have reached the end of the list, ladies and gentlemen. Well, for now. There's still a few games left for Harper to get tossed one more time.

Whether this is the end or just one moment of Harper's long career in Washington, Nats fans will be telling the tales of his ejections for years to come. He truly does it like no other player can.