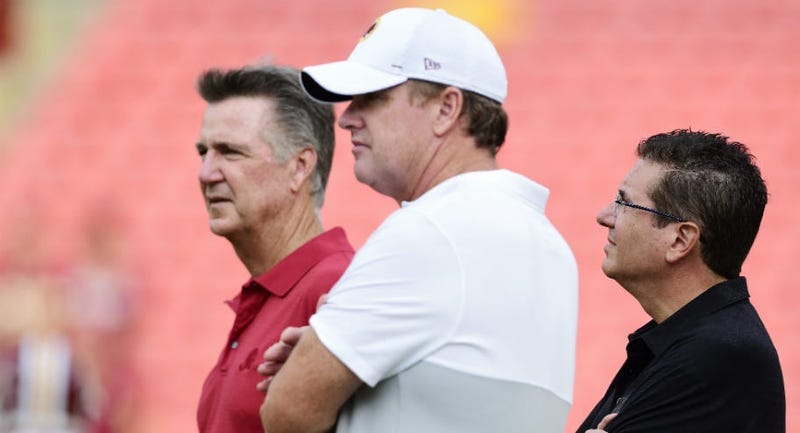 A week after he was fired as head coach of the Washington Redskins, Jay Gruden discussed the decision to draft Dwayne Haskins, said the Redskins' culture isn't "bad at all" and revealed he did not watch the team get their first win of the season against the Miami Dolphins in an interview Tuesday on ESPN Radio.

Gruden said he has "been bored out of my mind" since he was let go by Redskins team president Bruce Allen and owner Dan Snyder hours after a Week 5 loss to the New England Patriots.
"(It's been) pretty quiet, really. (I've) been bored out of my mind, really. I've been playing a little bit of golf, hanging out, just trying to get my wits about me and figure out the next move," he said on ESPN's "Dan Le Batard Show with Stugotz."

"I'm just taking this all in right now and trying to figure out what that next move will be in the next month or so," Gruden said in response to a Dianna Russini question about what he may do next. "Leave my options open, try to talk to some people and see if there's anything I can do to help in some capacity somewhere doing something. I don't know what that is, yet, Dianna, I really don't. But right now I'm enjoying my time off. You know, it's quite the grind, but as you know when coaches work as many hours as you do, when you take that away there's a lot of hours in the day you got to figure what to do with."

Perhaps some of that time could be filled by watching the Redskins beat the Dolphins in Week 6? Well, that was not the case.

"I didn't watch it, actually. I was playing golf," Gruden said.

"Yeah, I think that first Sunday is gonna be hard and I decided to go out to the golf course and played at Robert Trent Jones golf course, a couple of buddies of mine and had a good day," he added. "I was happy for some of the players and a few of the coaches that got the first win."

When asked by Le Batard Show co-host Jon "Stugotz" Weiner about how bad the culture in Washington has become, Gruden defended his attempts to create a better organizational culture through the draft and free agency.

"We spent a lot of time trying to get the right culture in there as far as draft and free agency and all that goes. I think we got some good quality players and good coaches in the house right now, really," Gruden said. "I don't think the culture is bad at all, quite frankly. When you go out and draft Jonathan Allen and Daron Payne..."

Gruden was then interrupted by Stugotz who said he was asking specifically about "the culture that Bruce Allen has created."

"Yeah, I think..." Gruden started before pausing. "Yeah, I can't say anything negative about the culture or anything right now.

"I think the most important thing is when you're the coach and you want to put a team together, you have a vision of what that should look like. And sometimes it doesn't match what other people envision and that's where problems occur," Gruden said. "But on the flip of that when you are a coach you don't have GM responsibilities and you don't have total say, then you have to do the best we can with what you're given. I think that's what we try to do as a coaching staff.

"And we did not always see eye-to-eye on some of the decisions that were made, but at the end of the day, that's the way it is in most buildings, quite frankly," Gruden continued. "So it's our job as coaches to work with what we have, put the pieces together the best way we can and try to find success. And unfortunately, I couldn't get that done in the last year and a half."

Russini followed-up by asking Gruden about the reported divisions within the organization about drafting Haskins in the first round of the 2019 NFL Draft, some of which said Gruden did not want Haskins.
"Well, I think with Case Keenum coming here with one year (left under contract) and Colt McCoy coming back from a broken leg, we didn't know how long Colt would be out, the fact of the matter is we had to get a quarterback in the draft somewhere, sometime," Gruden said. "And Dwayne is a great prospect so we chose to take him as an organization. And unfortunately, people are excited when you take a guy at 15. They want to see him play right away.

"But it was our professional opinion that he wasn't ready to step in and play in the first five games of the season, in my opinion," Gruden said. "It will take some time for him. He only played 13 or 14 games as a college player. He's very raw, but he's very talented. And it will take some time with him. He just wasn't ready when I was there. And maybe he'll get ready in the next coming weeks, but it was the direction we decided to go.

"There were some other quarterbacks that some people in the building liked later on in the draft, but we chose Dwayne and tried to make the most of it. He's still got a chance to be a great player without a doubt, it's just gonna take some time."

“It was fun, we had a good time, it was harmless, my kids played in it, and had fun,” he added.