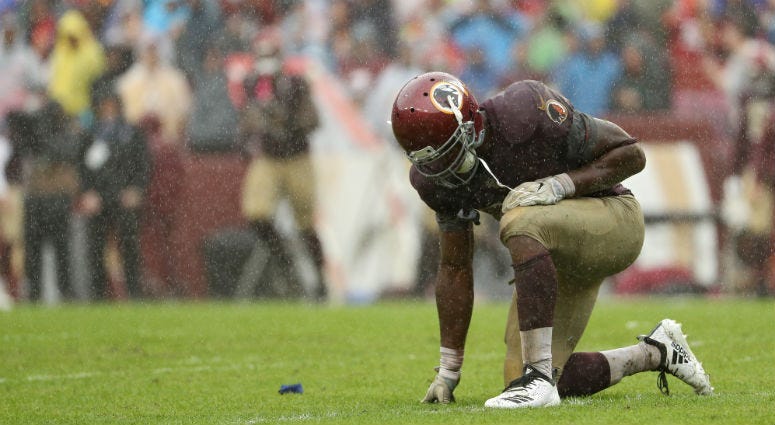 The Redskins were shut out by the 49ers in a miserable game played in miserable weather amidst a miserable season.

The conditions were legitimately brutal. Washington attempted just 12 pass attempts, completing nine of them for 77 yards. The score allowed for them to run the ball on a whopping 63 percent of their 41 snaps, but eventually the predictability was too much. Adrian Peterson's average just kept dropping and dropping as did the Redskins' chances of winning. The few downfield attempts Case Keenum had went poorly and that was enough for Bill Callahan to pull the plug on even trying.

It's bizarre when framed that way because Washington is the team with "nothing to lose." The 49ers came in to FedEx Field the same way they left it: unbeaten. The Redskin' "chances" were gadget plays to an undrafted rookie, Steven Sims, on a wet field where nobody could cut. Bold strategy, Cotton.

Defensively the Redskins played well, holding a top-five San Francisco offense to just nine points. However, on a day where the offense couldn't do anything, the key third downs given up were enough to doom them.

Of course this game did nothing to quell calls for rookie Dwayne Haskins. Those calls will be less on a short week, but barring a high-level performance from Keenum, they will be at a fever pitch going into Week 9 at Buffalo.

Even on the short week, I felt the need to ask Callahan about keeping Haskins on the bench for now, as fans are clamoring for an answer. Here is what he said in full:

"I think Dwayne is still learning, and he'd be the first to tell you that. And we still have total faith in Case and his abilities to manage this offense and run this offense and execute everything within it. We're going to stay with Case at this juncture."

The wait goes on. Next week might be different, but on the short week with Minnesota on Thursday, it wouldn't be fair to Haskins (or anyone else) to put him in that spot.

Quote of the day: "I would talk about penalties, but I see they're giving out some good fines. I can probably take my kids to college with how much they're giving out, so I'm just going to keep my mouth shut on that." - Ereck Flowers
Stat of the day: The Nationals have scored 45 runs in October. The Redskins have scored 24 points. (via ESPN Stats and Info).
Craig Hoffman is the Redskins beat reporter for 106.7 The Fan. His post-game columns are powered by Dell EMC and TVAR Solutions -- transforming the federal data center.
Follow @CraigHoffman for more Redskins insights