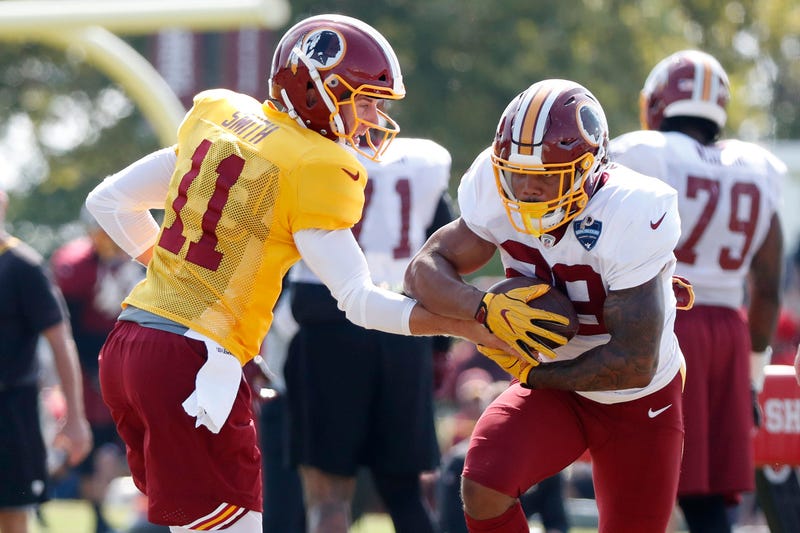 While it appeared good news was on the way, the story of Derrius Guice has taken a turn for the worse.

Guice tore his ACL in Thursday's preseason opener against New England and will miss the entire 2018 season, the Redskins announced. The team also announced a torn ACL for tight end Manasseh Garner, who will also miss the 2018 season.

RB Derrius Guice and TE Manasseh Garner will miss the 2018 season due to ACL injuries sustained from last night's preseason game at the New England Patriots. Both players are expected to make a full recovery and are looking forward to playing in 2019.

An earlier report from Ian Rapoport of NFL Network indicated Guice had only sprained his MCL, but was still awaiting MRI results.

Guice would have provided a big play threat in the running game this team hasn’t had since Portis and he has the ability to consistently keep the offense on schedule. That changes how defenses play and how Jay can call a game. Hard to explain the true magnitude of that.

Guice sustained the injury at the end of a nifty 34-yard run, which was called back on a holding penalty, in the final minutes of the first quarter. After being removed from the game, he remained on the sideline, knee wrapped, signaling potentially good news.

Guice was even in good spirits after the game, calming fans with an "all is well" after being asked in the locker room if his knee was good.

Derrius Guice thought he was fine and told teammates postgame he thought he merely hyperextended the knee. Apparently the symptoms got much worse on the flight home. Tough one for Guice, whom Jay Gruden said wanted the extra work in the preseason opener.

It brings Guice's season to an abrupt end before it even got going, postponing the promise of the 59th overall pick for another year.

There was no bigger storyline for the #Redskins this season than Derrius Guice's rookie impact. Easily more fan excitement about him than anything else. Just a crushing blow for the player, team and fan base.

It was so obvious on just 6 rushes, one of which went for 34 yards, how much better Guice was than what #Redskins fans have seen over the past few seasons. Vision, burst, balance, power. Such a dagger.

The news was first reported by Kimberly A. Martin of The Post.