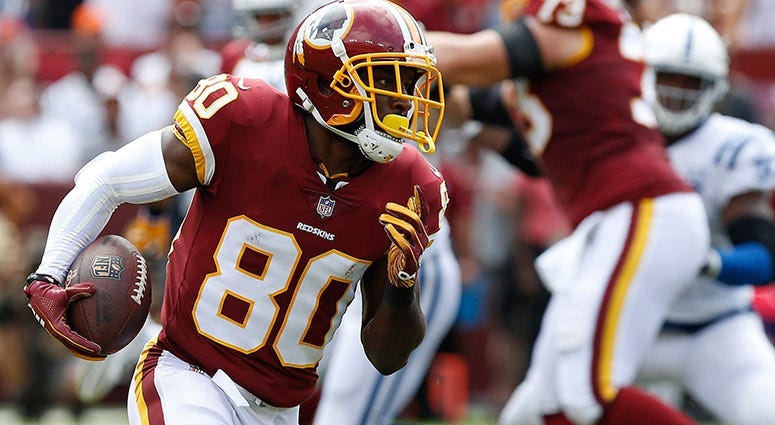 The Week 1 Redskins were great. The Week 2 Redskins were awful. The Week 3 Redskins will be... what, exactly? That's what we get to find out on Sunday when Aaron Rodgers and the Green Bay Packers come to FedEx Field.

My guess is Washington's offense bounces back from last weekend's dud and puts forth a much more respectable effort. I also think the Redskins' pass rush could finally break through on Sunday against Rodgers, who has an ailing knee that might prevent him from moving around in the pocket.

Here are my slants for this weekend's game:

Crowder has been targeted eight times and only caught five passes through two games. Those numbers aren't good enough. You have to imagine Jay Gruden, Alex Smith and some of the other important offensive minds in Ashburn have spent some time this week prioritizing his involvement moving forward. The last time Crowder played Green Bay he tallied 102 yards and a touchdown. Expect the shifty slot receiver to have a big game against the Packers' porous secondary.

The 310-pound defensive tackle is a play-ruining, drive-demolishing presence in the middle of Green Bay's front. Shawn Lauvao isn't going to play on Sunday, which means the Redskins will be starting a backup center (Tony Bergstrom) and a left guard who is actually a center (Chase Roullier). Daniels will be licking his lips at the possibility of getting to rush the quarterback against a patch-worked offensive line. The run-stuffer already has a sack this season.

Stat Of The Week

Redskins wide receivers have caught 18 passes for 173 yards through two games. Forget for a second that Michael Thomas of the New Orleans Saints might do that in a game at some point this season. Eight different players have more catches than Washington's entire wideout group, and 16 NFL players have posted more receiving yards.