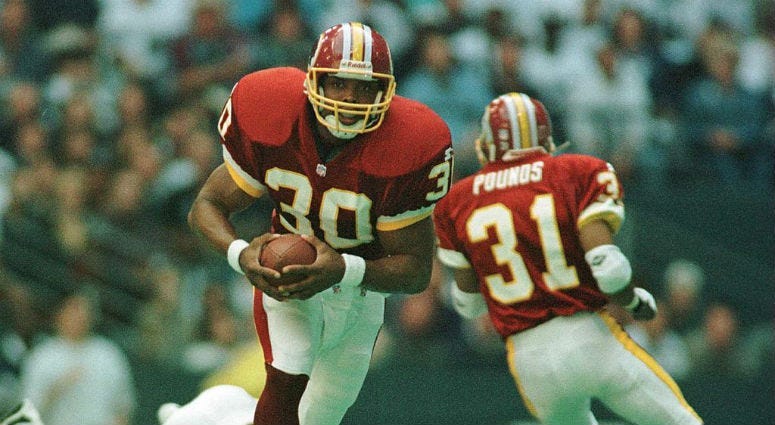 The hall’s board of trustees will decide August 2 whether to elect 20 people in 2020 rather than the usual seven or eight. The NFL’s 100th anniversary is the perfect time to amend the backlog of candidates long overdue for enshrinement, including 10 senior players rather than the typical one or two.

That means Brown and Jacoby have a real chance to reach Canton next year, and maybe Mitchell will join them as the league’s career leader in return yards.

Redskins Nation – get out your Ohio maps.

Mixing the 20 selections, which will require two induction dates to handle the lengthy speeches, with the league’s anniversary is a smart decision. There was just no way to catch up with senior selections of those whose careers ended more than 20 years ago. Jacoby came oh-so-close in his last years of eligibility, even reaching the final 10 once. Brown was overlooked because of a shorter career, but recent selections of those with similar tenures now make his case more compelling. And other special teamers have been honored, so it’s time for Mitchell to be selected.

Most likely, Jacoby has the leading chance of selection. He was the best left tackle of his generation, with three Super Bowl rings. Jacoby was a two-time All-Pro and four-time Pro Bowler on the famed “Hogs” from 1981-93 while playing 170 games. Not bad for someone who wasn’t drafted.

Fans of Brown relaunched his Hall of Fame bid last month before news of the likely expanded field. Now the running back’s chances have gone from possible to ‘why not?' Brown was the 1972 NFL Most Valuable Player, a four-time Pro Bowler, and two-time All-Pro. He was great from 1969-72 before knee issues slowed him down. Brown finished as the Redskins career rushing leader with 5,875 yards. The Redskins of the early ‘70s were powered by Brown.

Mitchell is still eligible as a modern-era player after retiring in 2004. From 1990-99 in Washington, Mitchell was as good a kick and punt returner as any. Indeed, the Redskins have never effectively replaced him. Mitchell played another four seasons with Philadelphia and the New York Giants to finish with 23,330 overall yards, second only to Jerry Rice. How can Mitchell not be in the Hall of Fame?
If greedy, why can’t the late Redskins owner Jack Kent Cooke also be included under special contributors? Surely, the team hasn’t been the same since his 1997 death and Cooke’s teams won three Super Bowls.

Maybe now some long overdue honors will include burgundy and gold. It’s about time.