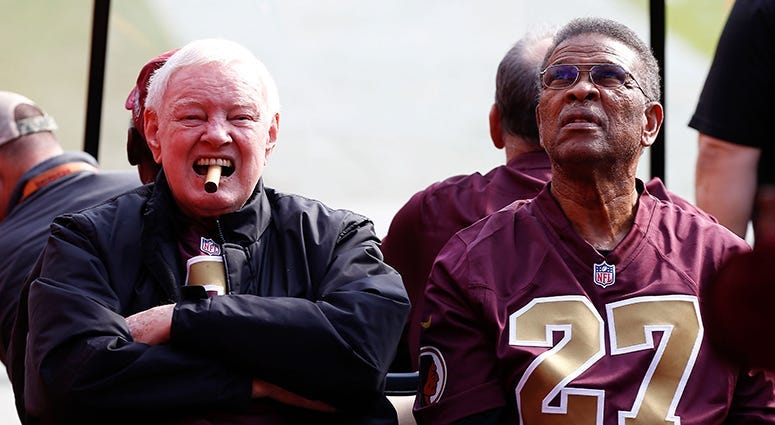 Fifty-five years wasn't enough of Sonny Jurgensen for many Washingtonians.

After a Hall of Fame playing career with the Redskins and then another generation in the booth, Jurgensen's sudden retirement as the team literally kicked off another season on Thursday was stunning.

Sonny really won't be around anymore.

"I had enough. Had enough," said Jurgensen from his Naples, Fla. home on Friday. "I thought about it for a couple years. You've eventually got to do it."

He was the last link to so many fun times. Jurgensen's close friendship with Billy Kilmer, that included driving around the beltway and berating anyone who had one of the popular "I Love Billy" or "I Love Sonny" bumper stickers. Sonny would give a hand gesture to Billy fans while Billy did so to Sonny backers. It was all in good fun. Washingtonians might have been divided over who should play, but the pair never were as they remain good friends.

Jurgensen played for Vince Lombardi in Washington. Called it the best year of his life. Teammate Sam Huff came out of retirement that year to play and always joked it was the one season Jurgensen didn't sport a beer belly.

And then there was "Sonny, Sam and Frank" that called the games on the airwaves during the three Super Bowl championships. The two Hall of Famers and broadcaster Frank Herzog were the glory days of the franchise. The trio were inseparable, even on the road when riding to games together. Herzog always drove while Jurgensen and Huff debated the route.

Herzog was the first to go in 2004, when Redskins management opted for Larry Michael. Huff left in 2014 because of declining health. Jurgensen stopped attending many road games the last two years, so his final step into retirement wasn't surprising.

"The three Super Bowls were great. They were fond memories, doing those games," Jurgensen said.

Ironically, Jurgensen was unhappy over being traded from Philadelphia to Washington in 1964. He didn't realize what a home it would become.

"At first, I was upset because I didn't know why," he said. "I just had a meeting with (Eagles coach) Joe Kuharich. He said everything was fine. I went down to a deli and was told I was traded. I said I know it was April Fools' day,  but this wasn't a trick. But, I went back around there (to Kuharich) and he said, 'Yes, they did.'"

Jurgensen didn't watch the Redskins preseason opener. His fall Sundays will be free for the first time since his teenage years. But, chances are he'll watch the NFL and golf.

"I don't know," Jurgensen said. "I'll wait until Sunday and see what I do. I'll probably watch (football)."