Barry Bonds says he would be fine with Aaron Judge breaking his single-season MLB record of 73 home runs, but his focus in regards to the likely American League MVP seems to be elsewhere.

It fells almost impossible that Judge, who is currently sitting on 60 home runs, will catch Bonds with just 13 games remaining in the regular season. Regardless of what happens, the seven-time National League MVP says he hopes Judge considers signing with the San Francisco Giants if he does indeed reach free agency this offseason.

"I hope he signs here," Bonds said in a rare interview with Barry M. Bloom of Sportico. "Can it happen? I don’t know. It depends on what the Yankee payroll is. But we would love to have him, I’ll tell you that."

Bonds spent the first seven seasons of his career with the Pittsburgh Pirates, before signing a free-agent deal with the team his dad Bobby and godfather Willie Mays once starred with.

When Bonds signed with the Giants, he agreed to a six-year/$43.75 million deal. Almost 30 years later, it will likely take around that figure annually to lure Judge this offseason.

The 30-year-old turned down a seven-year/$213.5 million contract extension with the Yankees prior to the season, which would have kicked in during the 2023 season after he made $19 million in his final year of arbitration eligibility.

Judge has gone on to put together perhaps the greatest contract year in franchise history. In addition to closing in on setting a new single-season AL home run record, Judge is slashing .316/.422/.703 with 128 RBIs, a 1.125 OPS and a staggering 10.7 fWAR.

Certainly, Brian Cashman and the Yankees will mount another effort to re-sign Judge this offseason. But Farhan Zaidi and the Giants could be lurking in free agency, hoping to sign the Linden, California native. And it sounds as though Bonds would be happy to be part of any pitch to Judge. 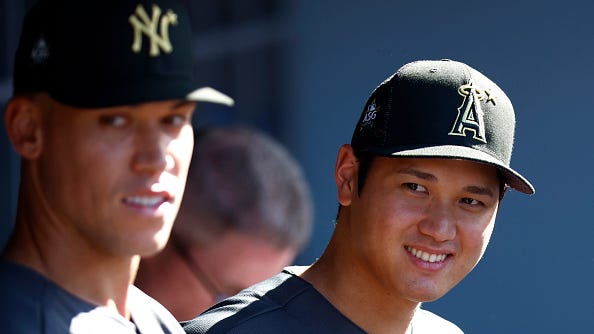