There's no turning back now. The Washington Nationals and Juan Soto are seemingly at an impasse and a national spectacle has been made of their ongoing negotiations.

Now the toothpaste is out of the tube, for better or worse. The Nationals have some degree of animus with their 23-year-old slugger, who now feels like he has to look over his shoulder.

"A couple weeks ago, they were saying they will never trade me," Soto said before Monday's Home Run Derby (which he won). "And now, all these things come out. It feels really uncomfortable. You don’t know what to trust. At the end of the day, it’s out of my hands what decision they make."

Danny Rouhier of 106.7 The Fan posed this question to his listeners Tuesday, wondering if leaking the news of their 15-year, $440 million offer to Soto makes the club look better or worse.

"If the Nationals had done this tomorrow — All-Star Game tonight, everybody's kind of taking their flights home," he said. "If they pinged little Ken Rosenthal and been like, 'Hey man, here's what's going on! FYI, $440 mill. Don't quote us.' If that comes out, that's a bombshell. That's a big deal."

"But now the focus of All-Star Weekend, instead of being about the All-Stars, is about Juan Soto, his contract and about a generational star being available for auction," he said. "Teams are supposed to get their bidding lined up. Pretty incredible that we're here. So my question for you is simple: Does that leak make the team look better or worse?"

One listener offered up this take: "I'm kind of leaning on your side of the fence, because I see that it doesn't benefit Soto. Now he has to worry about talking to the press about where he's going, all of that, instead of concentrating on the game. And even if he does get traded, the Nats are gonna be able to rebuild off of this trade. So I think it just benefits the Nats and it's kind of backfiring on him." 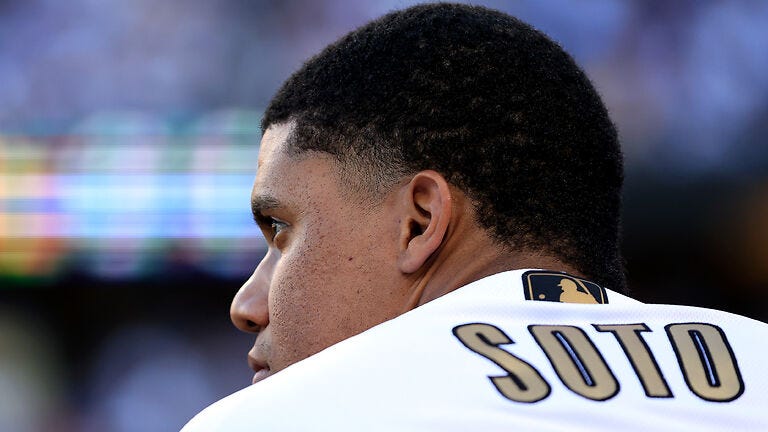