The list of oldest living NFL players is an extraordinary group of legendary Hall of Famers, individual record holders and lesser known players who put their lives and careers on hold to serve in World War ll.

There is no doubt it was a different game in the 1940s and 1950s, but it was football nonetheless, and these players deserve to be celebrated the same as any 5,000-yard passer or 2,000-yard rusher.

Ahead we’ve highlighted the 10 oldest living pro football players, based on the readily available information regarding player ages.

A high school standout at Bucyrus High School in Ohio, Sounders stayed in-state and went on to star at Ohio State University where he was a three-time All-American.

After serving in the Navy during World War ll before starting his pro career as a 25th-round pick in the 1945 NFL draft. In three seasons with the Detroit Lions, he tallied 17 receptions for 203 yards and one touchdown.

Sounders was inducted into the Ohio State athletic Hall of Fame in 2002.

Casanega was the No. 16 overall pick in the 1942 NFL draft by the Pittsburgh Steelers, but he turned down starting his pro football career to serve as a U.S. Naval aviator in World War ll.

He joined the San Francisco 49ers in the fledgling AAFC for the 1946 season. In 14 games, he recorded 90 rushing yards, 102 receiving yards and two touchdowns while also returning kicks and punts.

“Personally he’s just the most wonderful person I think most of us have ever met and to just be around him, his charisma, he just makes everyone happy and lights up the room when he’s in it,” Chris Casanega, Ken’s grandson, told Jenna King of NBC 52 at his 100th birthday celebration. 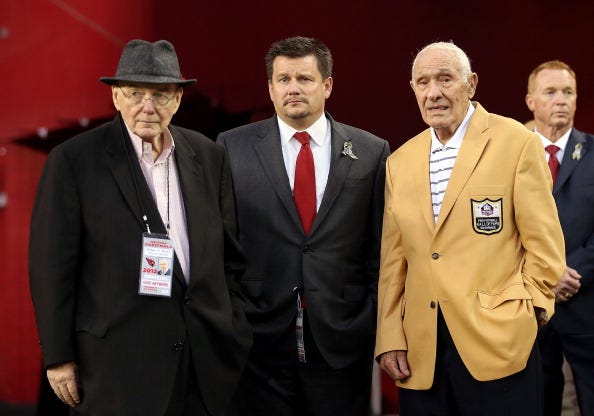 The oldest living member of the Pro Football Hall of Fame, Trippi was a member of the Chicago Cardinals famed “Million Dollar Backfield” as a rookie in 1947.

The No. 1 overall pick in the 1945 NFL draft as a “future pick” while still finishing his collegiate career at the University of Georgia, he signed a record four-year, $100,000 contract with a $25,000 bonus and helped lead Chicago to a championship in his debut.

Jones is joined by Gale Sayers (1965) and Alvin Kamara (2020) as the only players in NFL history to score six touchdowns in a single game.

He was a two-time Pro Bowl selection, including the 1951 season when he had his six-touchdown game, and he played 10 pro seasons with the Miami Seahawks, Brooklyn Dodgers and Cleveland Browns.

A three-sport athlete at the University of Minnesota, Grant actually began his career with two seasons in the NBA before joining the Philadelphia Eagles in 1951. 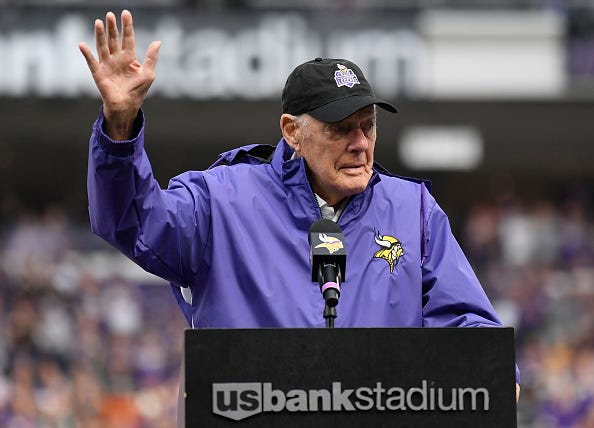 He played defensive end in his first season and led the league in sacks, then shifted to wide receiver where he tallied 997 receiving yards on 56 catches. When contract negotiations went south in Philadelphia, he joined the Winnipeg Blue Bombers in the CFL where he played four more seasons before moving into the role of head coach at the age of 29.

He coached in Winnipeg for 10 seasons before returning to the NFL with the Minnesota Vikings where he would establish himself as the greatest coach in franchise history. In 18 seasons, he led the team to 11 division titles, four Super Bowl appearances and a title in 1969. In 1994, he was inducted into the Pro Football Hall of Fame.

“Hugh McElhenny was to pro football in the 1950s and early 1960s what Elvis Presley was to rock and roll,” reads an old bio on the Pro Football Hall of Fame website.

Known as “The King” and “Hurryin’ Hugh” during his playing days thanks to his game-changing breakaway speed, McElhenny was a six-time Pro Bowl selection, five-time All-Pro, and a member of the 1950s All-Decade Team.

The opening line of McColl’s Wikipedia page reads like a clear contender for the title of “Most Interesting Man in the World,” listing him as an athlete, surgeon and politician.

After finishing third in Heisman Trophy voting as an All-American at Stanford in 1951, he was a third-round pick in the 1952 NFL draft by the Chicago Bears. He spent his entire eight-year NFL career in Chicago, recording 2,815 receiving yards and 25 receiving touchdowns in 96 games.

He continued his education at University of Chicago Medical School during his playing career and became an orthopedic surgeon, earning a humanitarian award from the Hall of Fame for serving as a missionary doctor in Korea from 1962 to 1964.

As for the politician note, he unsuccessfully ran for a state congressional seat in California three times, though he was a legitimate candidate all three times. 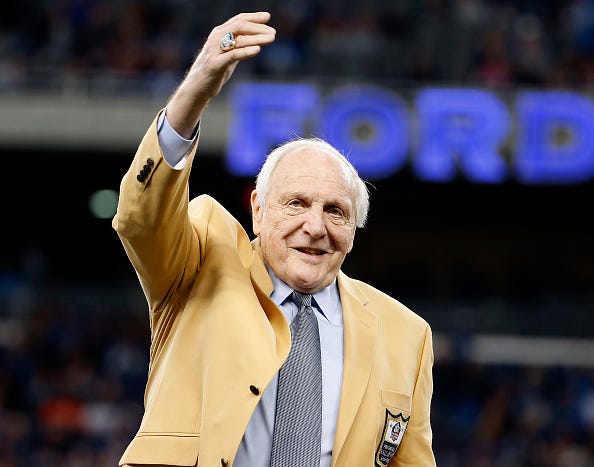 He spent his entire 13-year career with the Detroit Lions, helping the team win a pair of NFL championships in 1953 and 1957. Defensive stats are spotty from that era, but he is credited with 24 career interceptions and a pair of touchdowns.

A 1950s All-Decade Team selection, Schmidt had his No. 56 retired by the Detroit Lions and he was inducted into the Pro Football Hall of Fame in 1973. Following his playing career, he also served as head coach of the Lions for a six-year stretch from 1967 to 1972.