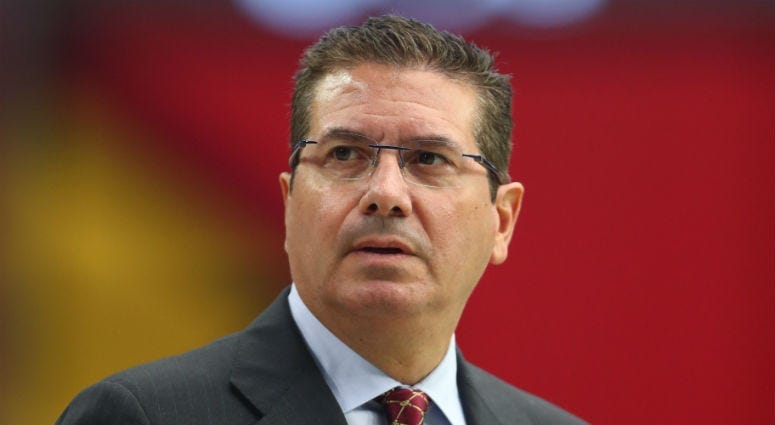 The Redskins' lease at FedEx Field in Landover, Md. runs until 2027, and the team has long been rumored to be on the hunt for a new site, either returning to D.C., or somewhere in Maryland or Virginia.

If Virginia Gov. Ralph Northam signs the sports betting bill into law, Virginia would become the 21st state to approve legal sports betting. It could pave the way for the Redskins to run a sports book at their new stadium, if they decide to move the team to Virginia.

Finding a location that would allow sports betting had been a hurdle for Snyder until now. Assuming Northam signs the bill, talks could accelerate on the Redskins next location.

House Bill 896 directs the Virginia Lottery to regulate future sports betting. If signed into law, betting on Virginia collegiate and youth athletics will be prohibited, as will in-game betting on all collegiate sports.
According to the Richmond Times-Dispatch, Snyder has a spot in mind for the new site with "better access" to the District than the originally proposed site near Dulles, but is keeping the location confidential for the time being because he's yet to enter "into a purchase agreement for it and doesn't want the price driven up."

The Redskins have played at FedEx Field since 1997. One of the major hurdles regarding the current home of the team is the distance from the nation's capital. The Redskins are the only major professional team that calls Washington D.C. home, yet plays in the state of Maryland.

The Nationals, Wizards and Capitals all play in the District and are close to public transportation for fan convenience. The closest metro station to FedEx Field is Morgan Boulevard, approximately one mile away from the stadium, about a 20-minute walk. The Redskins' previous home at RFK Stadium (1961-1996) provided fans with easy access via the Stadium-Armory metro station, just a 6-minute walk.

The new stadium location will look to be in closer proximity to a metro stop, making it easier for thousands of fans to travel to the game.