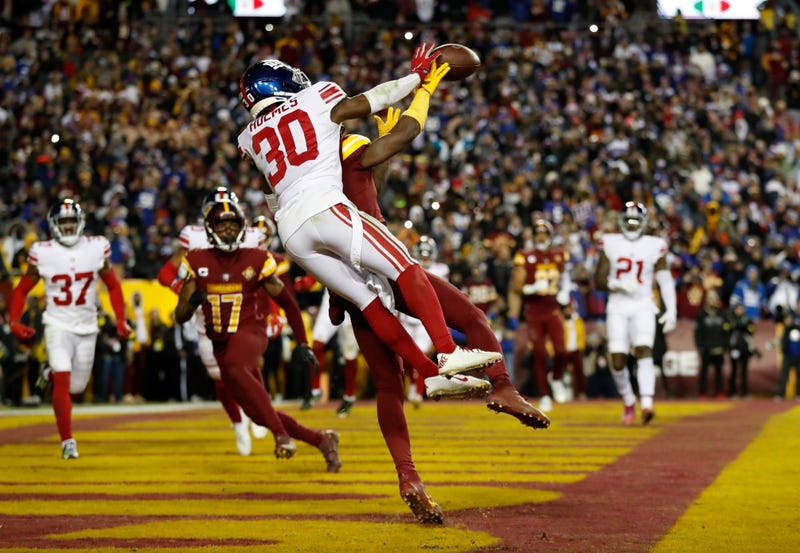 Darnay Holmes of the New York Giants defends against the Washington Commanders' Curtis Samuel and breaks up a pass late during the teams' Week 15 matchup on Dec. 19, 2022. Photo credit Getty Images

After tying with the New York Giants two weeks ago, the Washington Commanders seemed poised to roll over their NFC East counterparts on Sunday Night Football in Week 15 -- they were coming off a bye week, while the Giants were blown out by the Eagles in Week 14, and the game was at FedEx Field.

Unfortunately for the Commanders and their playoff hopes, things unfolded in the opposite direction, as the Giants won 20-12 on Dec. 19, 2022. Plenty of controversy and issues with various calls followed the game, and Adam Epstein took to the airwaves on Monday to give his 10 takeaways as the playoffs are further away than they were on Saturday.

"Number one [...] Washington got screwed by the refs, right?" he said. "We can blame the zebras after that game -- it felt like they wanted New York to win, from the pass interference that wasn't called [against] Curtis Samuel.

"[From] the pass interference on the final play of the game [too]," he added, "to the stupid, idiotic ref that decided to call illegal formation against Terry McLaurin after McLaurin checked with him over and over again, three different times [...] It felt like, to me, the refs wanted New York to win the game."

McLaurin had repeatedly checked with the referee to make sure he was appropriately lined up, but was called for the penalty afterward.

AWadd criticized the lack of run plays and getting "too cute" with the ground game, where Brian Robinson Jr. was gaining yards on rush plays while others weren't able to make much progress.

"Number four, the momentum completely swung on that [Taylor] Heinicke strip sack," he said, "and Washington never recovered. That's been a theme for us throughout the season -- when we have a back-breaking play, that's where we completely lose momentum."

He also touched on Chase Young maybe needing to return sooner, since the defensive line was run ragged, as well as the time management and decision-making from head coach Ron Rivera.

"Attempt the field goal from the 34-yard line -- a 51-yarder," he said. "If you have any faith in your kicker, you have to send them out there. [Not attempting it] tells everybody [...] you have no faith in Joey Slye.

Epstein also looked ahead to the playoffs and tried to stay positive, reiterating his faith in Heinicke but also blaming him for the overall loss.

Check out the entire segment below.