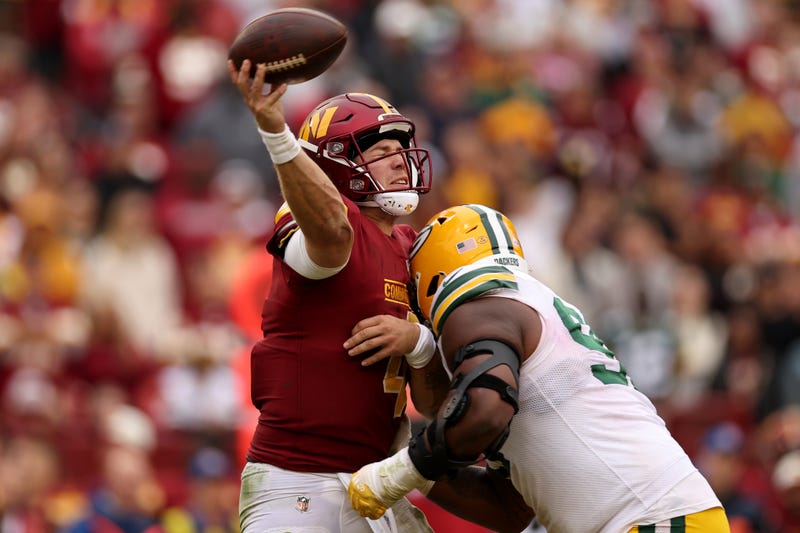 After quarterback Carson Wentz was sidelined due to injury, Taylor Heinicke - who notably stepped in for much of the 2021-22 then-Washington Football Team season and started 15 games, throwing for nearly 3500 yards and 20 touchdowns - slotted back in at QB1 for the now-Commanders.

His first start of the season came against the Green Bay Packers and their veteran, Hall-of-Fame-bound quarterback Aaron Rodgers ... and resulted in a 23-21 victory for Washington as the D.C.-based team improved to 3-4.

This came after a few weeks of criticism levied at Carson Wentz, who had most notably passed for just under 100 yards in a Thursday Night Football win. On a Victory Monday on 910 the Fan, Adam Epstein commented on Heinicke's ability to better direct the offense.

"Here's my opinion," AWadd said. "Taylor Heinicke takes hits, he stands in the pocket, he'll deliver the throw as there's defenders all over him, he takes the checkdowns easily. That's the big thing about Carson Wentz, his game -- he loves to force it downfield.

"Taylor Heinicke," he added, "will throw to the first option. If there's a guy wide open immediately for one yard, he'll take that and he'll get the ball into the receiver's hand and then say 'hey, it's time for you to make a play.'"

Epstein further broke down Heinicke's ability in terms of yardage and decisions.

"He doesn't always go deep," he said. "[He'll] pick up the chains with his feet, he doesn't go down easily. It felt like Carson Wentz was standing in the pocked there like a statue -- Taylor Heinicke will move around, he's patting the football with his hand as he's constantly looking downfield, he's moving around the pocket.

"[...] We got on him about his deep-ball accuracy," Epstein added. "Well, when it mattered most there, the start of the second half, he connected with Terry McLaurin for a 47-yard bomb."

Check out the full segments below on AWadd's "Victory Monday." Why do you think Heinicke managed the offense so well on Sunday?