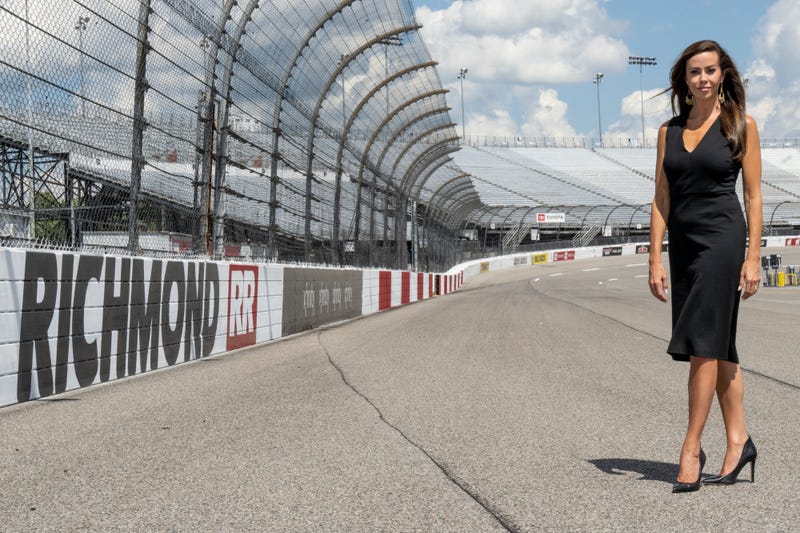 Adam Cheek sat down with the new Richmond Raceway president to discuss her first weeks at the helm of the short track, what drew her to the position, her experience with NASCAR and more.

NASCAR is nothing new to Lori Collier Waran, but her current occupation is.

Waran will have been president of Richmond Raceway for roughly a month by the time the fall race weekend (Aug. 13-14), featuring the Camping World Truck Series and Cup Series, rolls around; she succeeds Dennis Bickmeier, who helmed the track for more than a decade. She originally hails from Hanover County and has spent time with several publications, including Style Weekly, and her first exposure to NASCAR came from her husband.

The very first two races with her as president are set to have all the drama anyone could ask for: the second race of the first round of the Truck Series playoffs, the Worldwide Express 250 for Carrier Appreciation, and the third-to-last Cup event of the regular season, the Federated Auto Parts 400. The latter comes near the end of a chaotic regular season, in which the advent of the Next Gen car has led to increased parity within the sport. That has given way to a whopping 15 different winners so far, and with 16 playoff spots the tension over that final berth is palpable.

The following is an abbreviated version of the interview, conducted on Aug. 1; you can listen to the full version at the link above.

Adam Cheek, SportsRadio 910 the Fan: You were named the first female president of Richmond Raceway, [which has] been around for 76 years now. What does that mean to you to hold that significance?

Lori Collier Waran: I mean, anytime you have the distinction to be the first anything, I think it's special. I think [...] you take that honor with a lot of gratitude and a lot of humility, because it wasn't just you that got there alone. You had a lot of help from people around you, you almost play a supporting role in your own life. You had family, you had friends, you had a lot of teammates and colleagues that helped you get to where you are along the way. And so I'm very grateful for that honor, but I'm also very aware that it was not just me that got me to this point.

Cheek: What are some of your goals as president of the raceway? These first two weeks [were] obviously a whirlwind, but how have [they] been for you?

Waran: Yeah, a whirlwind is exactly right. You got that exactly correct. You know, 16 days in, that's it, but they've been great. And I have a lot of goals, but I think one of the things I've realized, in being in management and in leadership roles for more than 20 years, is don't set specific goals right away. Come in and do a listening tour. Come in and understand where things are with the organization, dig a little deeper, learn from those that are there and figure out how they stand. And I certainly don't want to set specific goals until we get through race weekend. I have a vision for where we want to go, but as far as setting specific things, I want to make sure I have a better picture and understanding of where things are because those are going to change -- those goals might change after I'm able to see the actual full picture of an entire race weekend. I think one of the biggest mistakes any leader can make is making assumptions, not based in full fact and knowledge. And I know I made that personally early on in my career. And I'm not interested in recreating that same scenario with this. This is too precious.

Cheek: You're coming in at a time of change for NASCAR as a whole. You've got the first year of the Next Gen [car] and Richmond's move into August, out of the playoffs, but you've also got 14 different winners in the Cup Series [to that date; the number is now 15]. So you've got all this tension going into this [race]. How exciting is the atmosphere around this race weekend and working with this team here for this very tense playoff week?

Waran: It's very exciting, and being the short track that's, you know, right before the playoffs. I mean, the action track, I think, is really going to see a lot of action because they because there's ]only two more spots and because there's so much at stake for the drivers and the teams. I think we're gonna see a lot coming up. I'm excited for it. I think what NASCAR has done with this car has really been very exciting this year, and I'm thrilled, I think we're gonna see a lot a lot of exciting things happening in just a couple of weeks.

Cheek: You mentioned the garter and everything, [that] your husband's a huge NASCAR fan. How psyched was he?

Waran: I mean, you know, when a pageant woman wins, like Miss America wins a pageant, and they sort of cry and their hands shake? Picture that moment, but my husband. So when he found out like that, it was kind of like "honey, you gotta calm down."

Cheek: Take me through your initial reaction, the moment you found out.

Waran: It was shocking, but also, I think we sort of knew it was a kind of a slow build, we kind of realized it was possibly coming and we were trying to make things work, but how could this happen and how can we do this? And so it was like a slow build to the rise of the actual yes, we're going to do this. So when I told my husband, yes, it's going to happen. He was the one that got the one-two punch, but I kind of knew it was sort of coming as a slow build. But it was it was it was incredibly like, wow, this is happening, really truly.

Cheek: Finally, just as a whole, what has this [entire experience] meant to you?

Waran: You know, as a female, like I shared with you earlier, anytime you have the opportunity to to enter an industry that is not predominantly female, I think it's special. And so I think that is something that I've cherished -- I've tried to kind of slow down in every moment and kind of take it in, because it's a unique situation to be a part of this industry. Lisa Kennedy has afforded me the privilege and honor by leading the way in that manner, and so I think that's what I'm trying to do. I'm just really trying to take it in and understand that that, I have a chance to possibly make an impact, but I want to make sure I do great work with for the fans because the fans of Richmond Raceway deserve it.