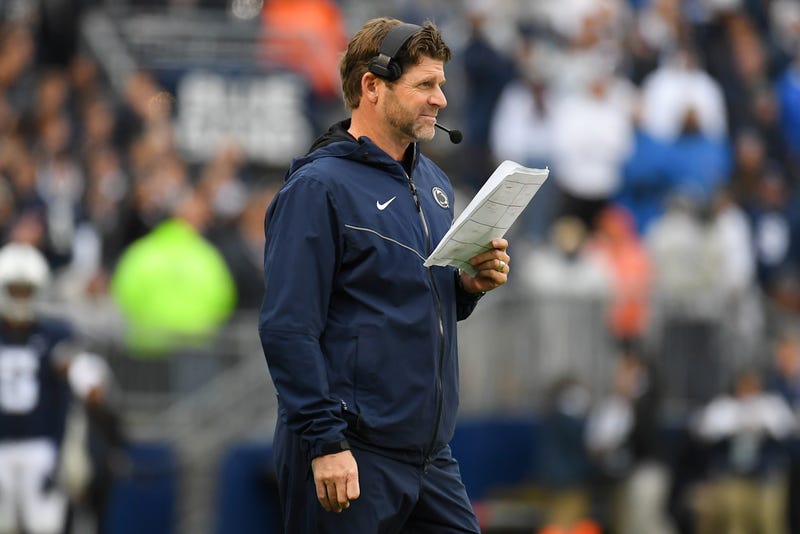 BLACKSBURG – Virginia Tech President Tim Sands and Director of Athletics Whit Babcock announced on Tuesday that Brent Pry has accepted the Virginia Tech Football head coaching position. The Altoona, Pennsylvania, native joins the Hokies after serving the past eight seasons as defensive coordinator/linebackers coach at Penn State. Pry returns to Blacksburg after working as a defensive graduate assistant for the Hokies from 1995-97 under head coach Frank Beamer and defensive coordinator Bud Foster.

Pry will be formally introduced to Hokie Nation at 9 a.m. ET Thursday in Blacksburg. Details on the press conference will be shared with the media when finalized. The media session is not open to the public, but will be streamed live at HokieSports.com/Watch.

"Laura and I are looking forward to cheering on Coach Pry and the Hokies under his direction," President Sands said. "We are pleased to welcome him back to Blacksburg. Coach Pry understands what it means to be a Hokie, and now he will have the opportunity to lead our team into Lane Stadium while Hokie Nation jumps to 'Enter Sandman.' Coach Pry owns an exemplary record during his previous coaching stops, and we expect that he and his family will call Blacksburg home for many seasons. We wish them the very best as we embark on this journey together."

"We are excited to welcome Coach Pry, Amy, and their family to Virginia Tech and the Blacksburg community," Babcock said. "I'm confident that Hokies everywhere will come together to embrace and support them as we enter this new chapter in the history of Virginia Tech Football.

"Coach Pry owns a winning track record on the football field, as well as a history of developing young men into leaders off the field and in the classroom," Babcock continued. "He's earned his way up the coaching ranks, and we believe he is the right person to lead Virginia Tech Football and to achieve the goals that we all aspire to attaining. He and his staff will aggressively recruit our region to keep in-state recruits home and attract the talent necessary to win championships in Blacksburg."

"On behalf of Amy and our family, we are extremely grateful to President Sands and Whit for extending us this opportunity at Virginia Tech," Pry said. "Working for Coach Beamer and Coach Foster as a graduate assistant in the 1990s, I was privileged to have been a part of this program as the Hokies established themselves as a national power, consistently proving they could beat anyone in the nation.

"Even after I departed Blacksburg, I always continued to appreciate Virginia Tech, its great players, its championship teams, and its wonderful traditions from afar. The resources, facilities, university backing of Athletics, and phenomenal fan support that Virginia Tech enjoys made this a very desirable situation. But just as importantly, the opportunity to raise our children in a community like Blacksburg also has great appeal. We can't wait to meet the team, the support staff, and Hokie Nation. We will be prepared to hit the ground running in order to attract the type of student-athletes to Virginia Tech who can help us achieve sustained success. Go Hokies!"

Pry indicated that J.C. Price will remain on his staff as associate head coach/defensive coach. Price led the Hokies to a 29-24 victory over Virginia as interim head coach in Tech's 2021 regular season finale. He will continue to serve in that role through Tech's bowl game. Pry worked with Price during his senior season as a player in 1995 when Tech finished the season with 10 consecutive wins, culminating with a 28-10 win in the Sugar Bowl over No. 9 Texas.

A 30-year coaching veteran, Pry has coached teams that have qualified for 15 bowl appearances and have finished in the FBS top 25 in total defense eight times. He has played an instrumental role in coaching top 10 defenses at Virginia Tech, Penn State, Vanderbilt, Georgia Southern, and Western Carolina. Since his promotion to defensive coordinator in 2016, the Nittany Lions have posted three seasons with 11 wins and four seasons with nine or more victories. He helped the Nittany Lions to the 2016 Big Ten Championship after defeating No. 6 Wisconsin in that conference's championship game. His longtime association with current Penn State head coach James Franklin dates back to 1993-94 when Franklin was the quarterback for East Stroudsburg University, where Pry coached outside linebackers and defensive backs.

"I'm truly excited for Brent and his family," Franklin said. "He's a passionate leader who'll inspire his team to play their best football; but his greatest strengths are his dedication, relatability and humility. It's those characteristics combined with his deep understanding of X&Os that will serve Virginia Tech and the entire Blacksburg community best."

Penn State also registered an 11-2 record in 2017 with Pry earning his first Broyles Award nomination. The Nittany Lions finished seventh in FBS in both scoring defense (16.5 ppg) and sacks per game (3.23) during the 2017 campaign. After taking sole reins as Penn State's defensive coordinator post in 2016, the team posted an 11-3 mark and finished seventh in the nation, averaging 8.1 TFL per game. As co-defensive coordinator for Penn State in 2014, Pry helped direct a unit that finished second in FBS in total defense (278.7 ypg).

"Virginia Tech is getting a great coach and a wonderful fit for our football program in Brent Pry," Hall of Fame coach Frank Beamer said. "Not only is Brent exceptionally intelligent, he also possesses a great deal of football knowledge. Growing up as the son of a coach, he's been around the game all of his life. I'm confident that he'll do a tremendous job as head coach of the Hokies."

Pry's father, Jim, played collegiately at Marshall and began his own 40-year college coaching career at his alma mater in 1973-74. The elder Pry went on to enjoy a distinguished career that included stints at Illinois, Duke, Dartmouth, Akron, East Stroudsburg University, Buffalo, VMI, and Bethune-Cookman, as well as time as a high school head coach.

"It's been such a pleasure to watch Brent grow, mature and excel at a very high level in the coaching profession," said former Tech defensive coordinator Bud Foster, who has served as a longtime mentor to Pry. "I'm so excited that he's earned this opportunity to lead our football program. The best coaches are the ones who are always striving to get better, who are open to new ideas and who can put their players in the best position to be successful. Brent embodies all of those qualities and so many others that it takes to be a leader. I'm so excited that he's coming back to Virginia Tech."

Pry served as co-defensive coordinator at Vanderbilt from 2011-13 prior to his arrival in State College, Pennsylvania. While at Georgia Southern in 2010, his defensive unit helped the Eagles to a win over No. 1 Appalachian State and an appearance in the NCAA FCS semifinals. A member of the Memphis staff from 2007-09, Pry's defensive line corps helped the Tigers to back-to-back bowl appearances. He also coached at Louisiana-Lafayette (2002-06), helping the Ragin' Cajuns to their first Sun Belt Conference championship following a four-year tour of duty at Western Carolina (1998-01). During his stint as a graduate assistant at Tech from 1995-97, he was part of a staff that guided the Hokies to three bowl berths.

Pry lettered as a defensive back at the University of Buffalo before suffering a career-ending injury. He began his coaching career as an undergraduate student in 1992. He graduated with a degree in history from Buffalo in 1993. Pry and his wife, Amy, are the parents of a son, Colby and two daughters: Madeline and Catherine.