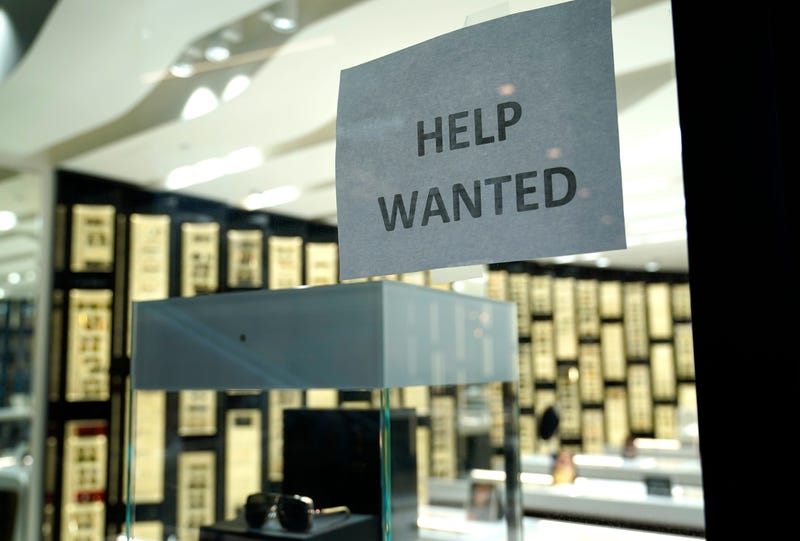 Photo credit A Help Wanted sign is posted at a Designer Eyes store at Brickell City Centre, Friday, Nov. 6, 2020, in Miami. The number of people applying for unemployment aid jumped last week to 853,000, the most since September, evidence that some companies are cutting more jobs as new virus cases spiral higher. The Labor Department said Thursday, Dec. 10, that the number of applications increased from 716,000 the previous week. (AP Photo/Lynne Sladky)
By The Associated Press

WASHINGTON (AP) — The worsening of the viral pandemic across the United States and Europe is threatening their economies and intensifying pressure on governments and central banks on both continents to intervene aggressively.

In a worrisome sign of the harm the virus is inflicting in the U.S, the government said Thursday that the number of Americans seeking unemployment benefits jumped last week to 853,000 — the most since September. The surge in jobless claims made clear that many companies are still shedding workers as states reimpose business shutdowns and consumers avoid shopping, traveling or dining out.

Consumers thus far haven’t spent as much this holiday shopping season as they have in previous years, according to credit and debit card data, and last month U.S. employers added jobs at the slowest pace since April. Restaurants, bars and retailers all cut jobs in November.

Responding to similar pressures, the European Central Bank announced Thursday that it will ramp up its bond-buying program to try to hold down longer-term interest rates to spur borrowing and spending. The ECB's action coincided with the highest single-day viral death toll in Germany, Europe's largest economy, and the shutdown of restaurants, bars, gyms, movie theaters and museums in France.

When the U.S. Federal Reserve meets next week, it may provide more detailed guidance on how long it will continue its own bond-buying program, which could reassure markets that its purchases won't end anytime soon. The Fed could announce other moves, such as shifting more of its purchases to longer-term bonds to try to further cut long-term borrowing rates and encourage spending. But most analysts think the Fed will keep that step in reserve.

Last week, the number of Americans who applied for jobless benefits jumped from 716,000 in the previous week. Before the coronavirus paralyzed the economy in March, weekly jobless claims typically numbered only about 225,000.

The surge in laid-off people seeking aid could raise pressure on Congress and the Trump administration to agree on another financial aid package to bolster the economy through what is sure to be a financially painful winter for millions.

A bipartisan group of senators has proposed a $908 billion package that would extend two unemployment benefit programs that are set to expire Dec. 26 for an additional four months. Without such an extension, more than 9 million unemployed workers would lose benefits, making it even harder for them to pay bills, buy food and keep up with rent or mortgage payments.

One disturbing sign in Thursday's report on jobless claims was that the total number of people who are receiving state-provided unemployment aid rose for the first time in three months — from 5.5 million to 5.8 million. The increase indicated that some companies have pulled back on hiring.

AnnElizabeth Konkel, an economist at the job listing website Indeed, said that increase was particularly concerning because it suggested that the December jobs report, to be released in early January, could show that the U.S. economy suffered a net loss of jobs in a month for the first time since April.

“Today's report is the first overt signal of a backward slide,” Konkel said. “It’s evident the labor market is still in crisis.”

One of the jobless, Montrell McGraw, said he just had to cancel his car insurance and now