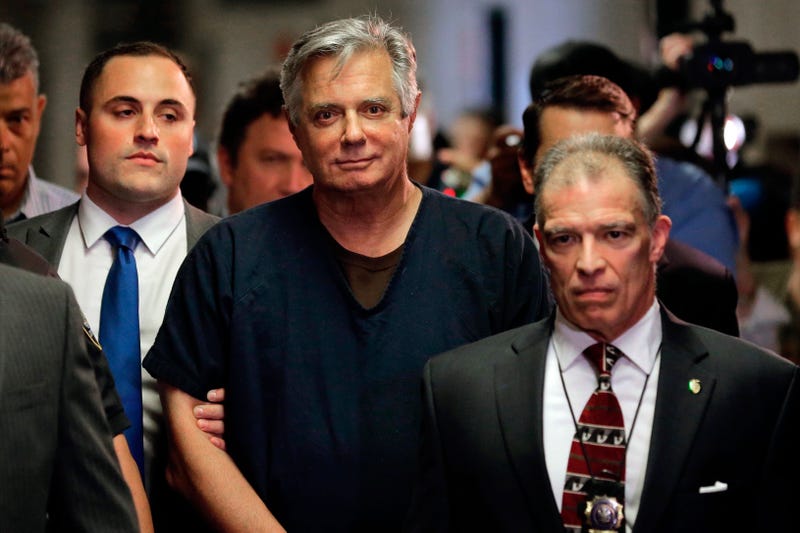 Photo credit FILE - In this Thursday, June 27, 2019 file photo, Paul Manafort arrives in court in New York. President Trump's former campaign manager is to be arraigned on state mortgage fraud charges. President Donald Trump on Wednesday, Dec. 23, 2020 issued pardons and sentence commutations for 29 people, including former campaign chairman Paul Manafort and Charles Kushner, the father of his son-in-law, in the latest burst of clemency in his final weeks at the White House. (AP Photo/Seth Wenig, File)
By The Associated Press

WASHINGTON (AP) — President Donald Trump on Wednesday pardoned more than two dozen people, including former campaign chairman Paul Manafort and Charles Kushner, the father of his son-in-law, in the latest wave of clemency to benefit longtime associates and supporters.

The actions, in Trump's final weeks at the White House, bring to nearly 50 the number of people whom the president has granted clemency in the last week. The list from the last two days includes not only multiple people convicted in the investigation into the Trump campaign's ties to Russia but also allies from Congress and other felons whose causes were championed by friends.

Pardons are common in the final stretch of a president's tenure, the recipients largely dependent on the individual whims of the nation's chief executive. Trump throughout his administration has shucked aside the conventions of the Obama administration, when thousands of pardons were issued for drug offenders not known to the general public, and instead bestowed clemency on a series of high-profile contacts and associates who were key figures in investigation that directly concerned him.

Even members of the president's own party raised eyebrows, with Republican Sen. Ben Sasse of Nebraska issuing a one-sentence statement: “This is rotten to the core."

The pardons Wednesday of Manafort and Roger Stone, who months earlier had his sentence commuted by Trump, were particularly notable, underscoring the president's desire to chip away at the results and legacy of special counsel Robert Mueller's Russia investigation. He has now pardoned four people convicted in that investigation, including former national security adviser Michael Flynn and campaign adviser George Papadopoulos, who pleaded guilty to lying to the FBI.

“The pardons from this President are what you would expect to get if you gave the pardon power to a mob boss,” tweeted Andrew Weissmann, a Mueller team member who helped prosecute Manafort.

Manafort, who led Trump's campaign during a pivotal period in 2016 before being ousted over his ties to Ukraine, had been sentenced to more than seven years in prison for financial crimes related to his political consulting work in that country. He was among the first people charged as part of Mueller's investigation into ties between the Trump campaign and Russia. He was released to home confinement last May because of coronavirus concerns in the federal prison system.

Though the charges against Manafort did not concern the central thrust of Mueller's mandate — whether the Trump campaign and Russia colluded to tip the election — he was nonetheless a pivotal figure in the investigation.

His close relationship to a man U.S. officials have linked to Russian intelligence, and with whom he shared internal campaign polling data, attracted particular scrutiny during the investigation, though Mueller never charged any Trump associate with conspiring with Russia.

Manafort, in a series of tweets, thanked Trump and lavished praise on the outgoing president, declaring that history would show he had accomplished more than any of his predecessors.

Trump did not pardon Manafort's deputy, Rick Gates, who was sentenced last year to 45 days in prison but extensively cooperated with prosecutors, or former Trump lawyer Michael Cohen, who pleaded guilty to campaign finance crimes related to his efforts to buy the silence of women who said they had sexual relationships with Trump. Both were also convicted in the Mueller probe.

New York City prosecutors, meanwhile, have been seeking to have the state’s highest court revive state mortgage fraud charges against Manafort after a lower court dismissed them on double jeopardy grounds. A spokesman for District Attorney Cy Vance said the pardon “underscores the urgent need to hold Mr. Manafort accountable for his crimes against the People of New York.”

Manafort and Stone are hardly conventional pardon recipients, in part because both were scolded by judges for effectively thumbing their nose at the criminal justice system. Manafort was hit with a witness tampering charge even after he was indicted and was accused by prosecutors of lying while trying to earn credit for cooperation.

Stone, who was convicted of lying to Congress about his efforts to gain inside information about the release by WikiLeaks of Russia-hacked Democratic emails during the 2016 campaign, was similarly censured because of his social media posts as the case was pending.

In a statement Wednesday, Stone thanked Trump and alleged that he had been subjected to a “Soviet-style show trial on politically-motivated charges”

Kushner is the father of Trump’s son-in-law, Jared Kushner, and a wealthy real estate executive who pleaded guilty years ago to tax evasion and making illegal campaign donations. Trump and the elder Kushner knew each other from real estate circles and their children were married in 2009.

Trump’s legally troubled allies were not the only recipients of clemency Wednesday night. The list of 29 recipients included people whose pleas for forgiveness have been promoted by people supporting the president throughout his term in office, among them former Florida Attorney General Pam Bondi, Newsmax CEO Christopher Ruddy and Sen. Rand Paul of Kentucky.

One of the pardon recipients was Topeka Sam, whose case was promoted by Alice Johnson, a criminal justice advocate whom Trump pardoned and who appeared in a Super Bowl ad for him and at the Republican National Convention.

“Ms. Sam’s life is a story of redemption,” the White House said in its release, praising her for helping other women in need.

Others granted clemency included a former county commissioner in Florida convicted of taking gifts from people doing business with the county; a community leader in Kentucky convicted of federal drug offenses; and former Justice Department official who was convicted for his role in the influence peddling scandal surrounding former lobbyist Jack Abramoff.