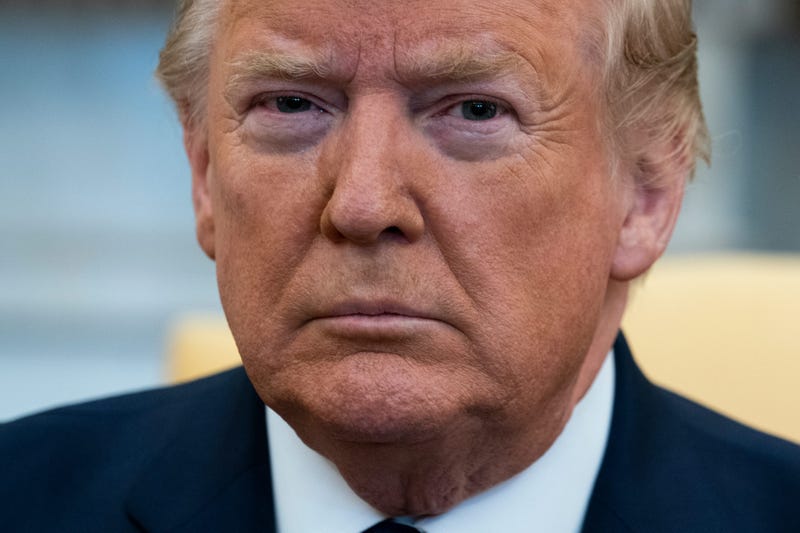 Photo credit FILE - In this Jan. 27, 2020, file phoot President Donald Trump listens during a meeting with Israeli Prime Minister Benjamin Netanyahu in the Oval Office of the White House in Washington. The most improbable of presidents, Donald Trump reshaped the office and shattered its centuries-old norms and traditions while dominating the national discourse like no one before. (AP Photo/ Evan Vucci)
By The Associated Press

On Thursday, House Democrats who also favor $2,000 checks will all but dare Republicans to break with Trump, calling up his proposal for a Christmas Eve vote. The president's last-minute objection could derail critical legislation amid a raging pandemic and deep economic uncertainty. His attacks risk a federal government shutdown by early next week.

"Just when you think you have seen it all," House Speaker Nancy Pelosi wrote Wednesday in a letter to colleagues.

“The entire country knows that it is urgent for the President to sign this bill, both to provide the coronavirus relief and to keep government open.”

Republicans led by Senate Majority Leader Mitch McConnell have resisted $2,000 checks as too costly. House Republicans are expected to block the vote, but Democrats may try again Monday.

The president's last-minute objections are setting up a defining showdown with his own Republican Party in his final days in office.

Rather than take the victory of the sweeping aid package, among the biggest in history, Trump is lashing out at GOP leaders over the presidential election — for acknowledging Joe Biden as president-elect and rebuffing his campaign to dispute the Electoral College results when they are tallied in Congress on Jan. 6.

The president’s push to increase direct payments for most Americans from $600 to $2,000 for individuals and $4,000 for couples splits the party with a politically painful loyalty test, including for GOP senators David Perdue and Kelly Loeffler, fighting to retain their seats in the Jan. 5 special election in Georgia.

Republican lawmakers traditionally balk at big spending and many never fully embraced Trump’s populist approach. Their political DNA tells them to oppose a costlier relief package. But now they're being asked to stand with the president.

On a conference call, House Republican lawmakers complained that Trump threw them under the bus, according to one Republican on the private call and granted anonymity to discuss it. Most had voted for the package and they urged leaders to hit the cable news shows to explain its benefits, the person said.

McCarthy later sent a letter to colleagues suggesting Republicans would offer their own proposal, picking up on Trump's own complaints about foreign aid to “reexamine how our tax dollars are spent overseas.”

As Congress left town for the holidays, the year-end package was part of a hard-fought compromise, a massive 5,000-plus page bill that includes the COVID aid and $1.4 trillion to fund government agencies through September and address other priorities.

The relief bill Trump is criticizing would establish a temporary $300 per week supplemental jobless benefit, along with a new round of subsidies for hard-hit businesses, restaurants and theaters and money for schools, health care providers and renters facing eviction.

Even though Treasury Secretary Steven Mnuchin represented the White House in negotiations, Trump assailed the bipartisan effort in a video he tweeted out Tuesday night, suggesting he may not sign the legislation.

Railing against a range of provisions in the broader government funding package, including foreign aid mainstays included each year, Trump called the bill a “disgrace.”

Trump did not specifically vow to use his veto power, and there may be enough support in Congress to override him if he does. But the consequences would be severe if Trump upends the legislation. It would mean no federal aid to struggling Americans and small businesses, and no additional resources to help with vaccine distribution. To top it off, because lawmakers linked the pandemic relief bill to an overarching funding measure, the government would shut down on Dec. 29.

The final text of the more than 5,000-page bill was still being prepared by Congress and was not expected to be sent to the White House for Trump’s signature before Thursday or Friday, an aide said.

That complicates the schedule ahead. If Trump vetoes the package, or allows it to expire with a “pocket veto” at the end of the year, Americans will go without massive amounts of COVID aid.

A resolution could be forced Monday. That's when a stopgap funding bill Congress approved to keep the government funded while the paperwork was being compiled expires, risking a federal shutdown.

Democrats are considering another stopgap measure to at least keep government running until Biden is sworn into office Jan. 20, according to two aides granted anonymity to discuss the private talks.

The House was already set to return Monday, and the Senate Tuesday, for a vote to override Trump's veto of the must-pass defense bill. Democrats may try again at that time to pass Trump's proposal for $2,000 checks, as well as the temporary government funding measure to avert a shutdown, the aides said.

The push for bigger payments to Americans drew rare common cause between Trump and some of the most liberal members of Congress. Pelosi and Democrats said they fought for the higher stipends during protracted negotiations only to settle on the lower number when Republicans refused.

Pelosi is set to offer the president’s proposal Thursday under a procedure that allows just one lawmaker to object to its consideration. It will be pushed forward during a so-called pro forma session, with few lawmakers expected to attend. McCarthy and Republicans are poised to object.

Republicans have been reluctant to spend more on pandemic relief and only agreed to the big year-end package as time dwindled for a final deal. Sen. Chuck Schumer, the Senate Democratic leader, said that “Trump needs to sign the bill to help people and keep the government open,” and Congress would step up for more aid after.

The Senate cleared the huge relief package by a 92-6 vote after the House approved it by 359-53. Those votes totals would be enough to override a veto should Trump decide to take that step.