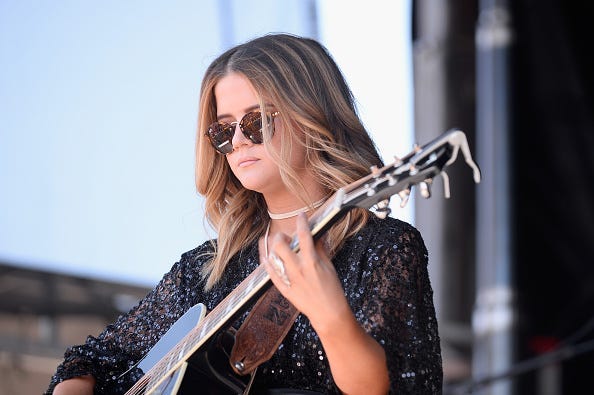 Photo credit Bryan Steffy
By US 99

It has been about 15 months since Maren Morris released her chart-topping sophomore album, GIRL that has produced such hits as the title track, "GIRL" and her history-making #1 "The Bones."

Since then her career has skyrocketed and her family has grown with the introduction of her baby boy Hayes with husband Ryan Hurd. Morris said this past year has been a very transformative one for her and now with some time off the road, she has decided to polish two older demos and officially release them for fans to hear.

GIRL has been out over a year & has been one of the most transformative periods of my life. During this time off the road, I had the opportunity to polish up 2 older songs of mine that I couldn’t wait for you to hear. “Just for Now” + “Takes Two” out Friday. ✨ pic.twitter.com/I0xzhIauFh

The new 'old' songs "Just For Now" and "Takes Two" appear as additional tracks at the end of the streaming version of GIRL.
"Just For Now" was written by Morris and husband Hurd, produced by the late Busbee, and was actually written during sessions for her debut album Hero.
"Takes Two" was originally recorded for GIRL, but did not make the final cut.