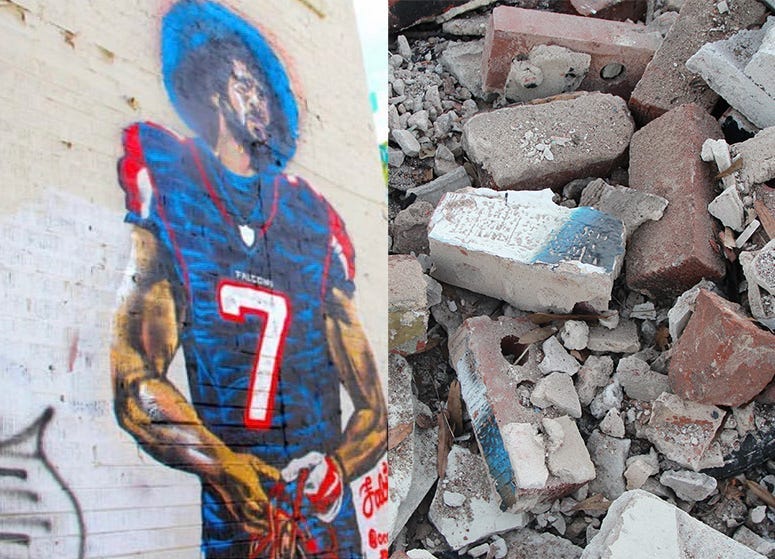 UPDATED - SUNDAY, FEB. 3: Fabian Williams announces that he and other artists have received approval by seven local business to put new Colin Kaepernick murals all around Atlanta. Read the story here.

Fabian Williams is one of the most popular visual artists living in Atlanta. But even more people learned his name after a mural he painted of Colin Kaepernick wearing Michael Vick’s #7 Atlanta Falcons jersey lit up social media far beyond the city.

That mural, as of February 1, 2019, is now a pile of bricks laying on the corner of Fair Street and Joseph E. Lowery Boulevard. And Williams, who wasn’t expecting to find his popular work of art destroyed out of nowhere, discovered it himself earlier today.

“I found out by going to an interview with NPR this morning, at another mural I did down the block; that’s when I passed it. It took a second for me to register that the building was gone. I saw the bulldozer moving the bricks from the lot and realized they were demolishing the building.” 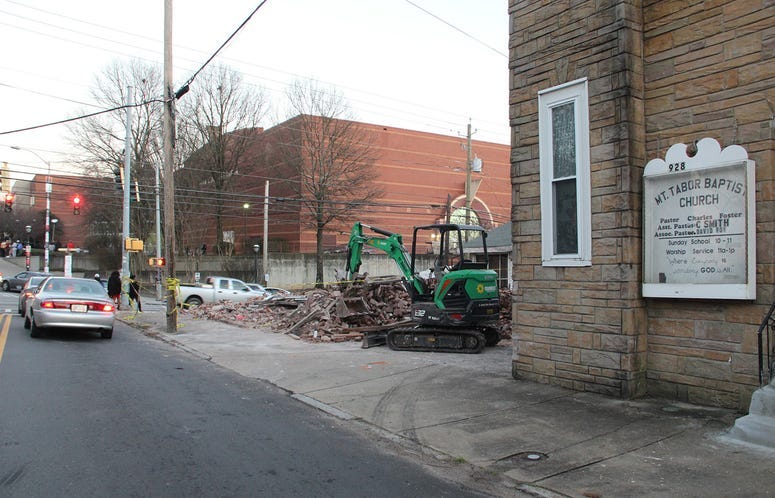 Williams said he doesn’t believe it’s a coincidence that it happened when it did, on the Friday before Atlanta hosts the Super Bowl, a day that also coincides with a month-long national celebration of African-American excellence. “The biggest thing, I feel like, was it happened today. It’s the first day of Black History Month and you demolish that building? Come on man. I just can’t believe they would choose this day, unless it was just a middle finger.”

Before it was demolished, the building stood between two church buildings and the campus of Morehouse College, in Atlanta’s historic West End community. Also painted on the front wall, standing next to Kaepernick as Vick (which Williams calls "#kaeplanta"), was a creative interpretation of another legendary athlete – one who also sacrificed part of his career over his beliefs: Muhammad Ali, or "#WakandaAli" in this case. Standing side by side, Ali was dressed as T'challa, the Black Panther. To Williams, the mural was more than just another cool piece of outdoor art painted on bricks. “This was a symbol. At least for the people who lived there." 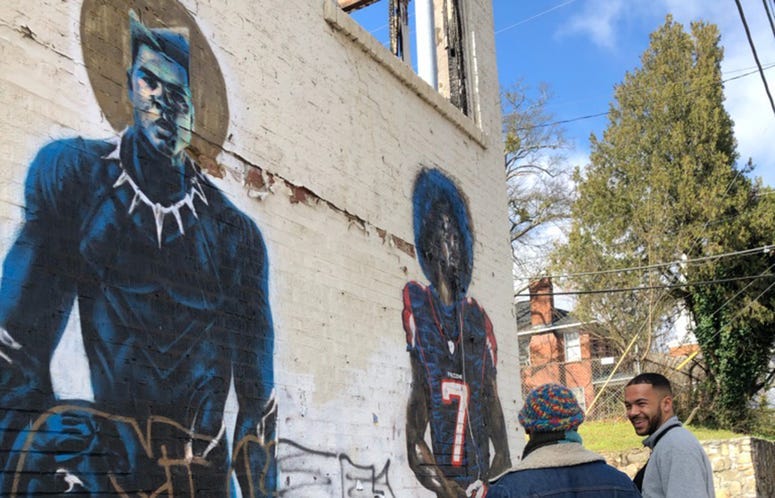 Williams, who also goes by the pseudonym “Occasional Superstar,” says he’s known for some time that there were some powerful people who didn’t like the mural. He and other artists actually sued the city in 2017, and won, before the mural was created. They were upset over governmental threats of having to comply with a rarely enforced ordinance that says street art – even on private property – must go through government approvals if it is going to be displayed in view of the public.

“I met the building owner before, while talking to another muralist who was putting something on the building. He said ‘I like the artwork, but the city has been saying someone has to paint over it,’ after I won the lawsuit with two other artists and the business owner preventing the city from telling an artist what to do. Then it caught on fire. That was about six months ago, and I didn’t hear anything else. I thought they were gonna demolish it after that, but they never did. Fast forward to now.” 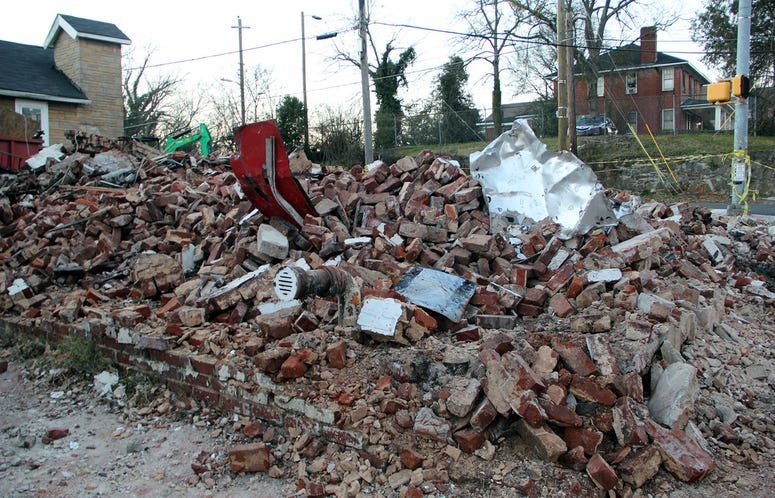 Now, in the pile of bricks, you can see parts and pieces that still wear the paint Williams brushed over them back in August of 2017. And Williams is understandably frustrated.

“The fact that Kaepernick is at this point a living civil rights icon, and you choose Black History Month to demolish his symbol, that’s a f**k you. That’s what it is. Especially if it goes to the point where they demolish a symbol of the player they got rid of because he made a point to speak out on inequality and disparity. That’s the guy you don’t like?”

Williams also said he’s noticed that certain brands that initially were interested in working with him on projects and commissions for Super Bowl 53 strangely stopped communicating with him and decided to work with others. He believes it has something to do with his mural, and speculates that the NFL wasn’t happy about it. “To me it’s obvious that I’m being avoided. It’s gotta be, because too many people came to me and were excited to work with me. Then once they checked with the NFL, they went in another direction.” He said those brands included Hyundai, Rolling Stone, and Atlanta arts organization Wonderroot, who he said initially offered to have him create seven murals. He said he’s thankful for Nike coming to him, but thinks the only reason I got to work with the athletic apparel company is because they’d already taken a stance with Kaepernick. And he’s concerned about the economic impact that blackballing – if that’s indeed what’s happening – could have on his successful career as an independent creative artist.

“If you read up on other Civil Rights people, money is an issue. When King died, he didn’t have a lot of money. Doing things like this are extremely expensive. And the city already has a terrible record of supporting the arts. If Nike didn’t hook me up, it would have been a cold winter.

But I do believe I’ve got people watching out for me. Ancestors, God, angels… I just feel like the stuff I’m painting about needs to be addressed.” 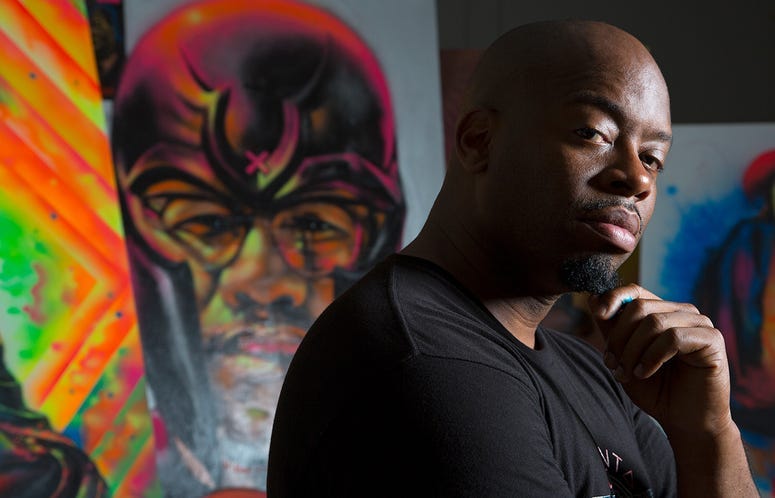 Though the mural’s demolition is clearly a disappointment, Williams is not defeated. His murals, which recently have focused on Civil Rights Movement leaders, sometimes wearing modern fashion and hairstyles (possibly to appeal to youth who may not be fully familiar with names like Hosea Williams and James Baldwin). Other times they are glowingly reimagined as powerful characters from comic books, like Malcolm X as Magneto from the X-Men series. His style is something like cosmic afro-futurism, with respect and admiration for heroes, and intentional elevation of the great things that black leaders have done in every generation. And Williams said he plans to create another mural immediately, promising that it’ll be done before or during Super Bowl 53.

“Before the game is over, there will be another mural on the streets. I’m looking to do as much as I can right now to make something that’s gonna resonate on the level that it needs to, you know what I’m saying? I can’t say exactly what that’s gonna be but it’s going to be something, because I’m motivated. I’m in the zone right now. I just did a mural for Nike, and I had to do it in a very short amount of time, so my senses are tightening. It’s the best time for me to do this. So I’m just gonna say it again, and say it louder. I don’t know whose idea it was, but to do it on February 1st in the home of Civil Rights?