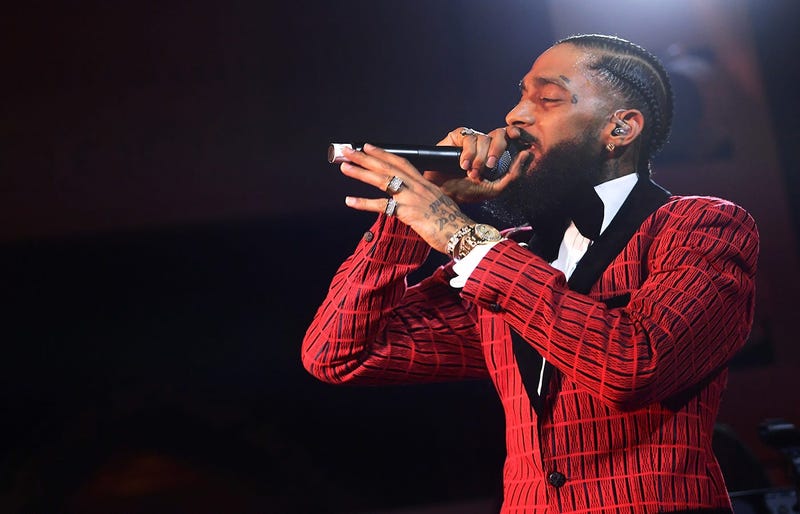 NBC News and multiple other sources are reporting that influential West Coast rap star Nipsey Hussle has died in Los Angeles. He was 33 years old.

Nipsey Hussle was shot along with at least two other men in front of his own clothing store, The Marathon Clothing, located in L.A.'s Hyde Park neighborhood. Reports are still coming in about the other two shooting victims.

Hussle was a highly influential rap artist. Having recently been profiled in GQ magazine along with his partner actress Lauren London, he'd also been enjoying considerable buzz following the release of his album Victory Lap, which received positive reviews and was nominated for Best Rap Album at the 2019 Grammy Awards.

His final tweet, posted shortly before the shooting, seemed to suggest that he was aware of unnamed adversaries.

Having strong enemies is a blessing.

Sympathies and statements of support are flooding Twitter from all over the world, from fans to celebrity admirers.

Watching Nipsey inspired me to invest and own in our communities. He was a solid man who loved his woman, his family and his community. This hurts.

RIP Nipsey. I just spent Thursday with him filming a video for a beautiful new song we created with Khaled. We filmed in Inglewood, close to where he grew up. He was so gifted, so proud of his home, so invested in his community. Utterly stunned that he's gone so soon.

This is so painful! @NipseyHussle was doing great work for the people. Keep his legacy alive by carrying on his work! Sending love to his family. Rest in Power King 👑 pic.twitter.com/hE2MNibbZ7

🙏🏾💙. A black man, was murdered today. He was a man to his woman, a father to his children and a leader in his community. We are weaker without him.

My sincere condolences to… https://t.co/hF4pjTmVTl

Sad, mad and disappointed about my guy @NipseyHussle

RIP Nipsey man. This is tragic

Broke me.... we really fighting for our lives against our own kind and really have to take risk and match the level of hatred that we are born in .. I’m tired 🙏🏾 prayers for my brother and his family

Rest In Peace to Nipsey Hussle, and condolences to Lauren London, their child, and their entire family and loved ones.