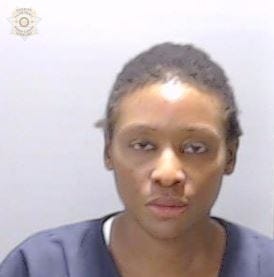 Raissa Kengne is identified as the suspect in the deadly triple shootings in midtown Atlanta Monday afternoon. The 34 year old Kengne was arrested near the south baggage claim inside Atlanta Hartsfield Jackson International Airport after an hours-long search. It was a massive police presence that alerted the public to steer clear of Midtown.

Atlanta Police Department says it was around 1:45pm when they responded to a call about the shootings in the management office of 1280 West condos on West Peachtree Street. The victims are identified as 60 year old Property Manager Michael Shinners of Alpharetta, and Chief Building Engineer Mike Horne. Shinners died at the scene. Horne's injuries are described as 'critical'.

Around 2:15pm Kengne is alleged to have shot 41 year old Wesley Freeman
at 1100 Peachtree Street. He died at the hospital.

All 3 of the victims worked for Beacon Management Services, the 1280 West property management.

Kengne is identified as being a resident at the condos. The victims were apparently included in a nearly 600 page federal lawsuit filed by the shooting suspect earlier this year. The lawsuit was dismissed. Kengne had reportedly filed an appeal last week.

APD says they received information that the suspect was headed to the airport. Kengne was taken into custody without incident.

She is charged with 2 counts of Felony Murder, 4 counts of Aggravated Assault, Possession of a Firearm During Commission of a Felony, and False Imprisonment.

Kengne's first court appearance is scheduled for 11:00 this morning.