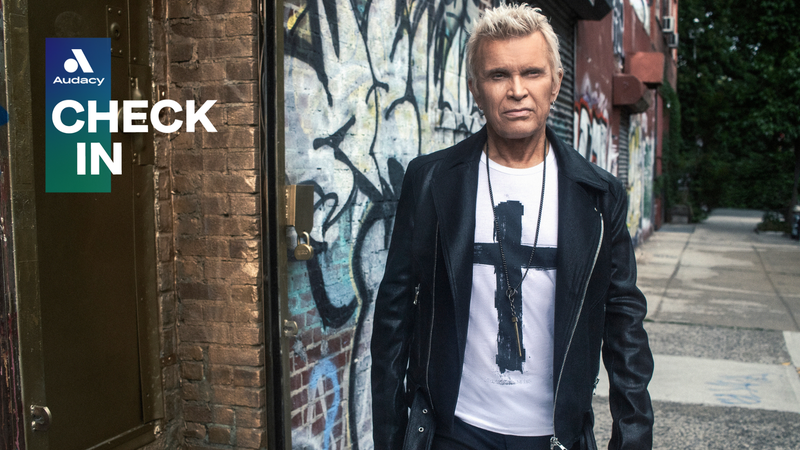 Heads up, BFI fans! The man himself, Billy Idol, has joined us today for a special Audacy Check In in the midst of his current The Roadside Tour, now making stops in select U.S. cities -- and on the release day of his newest single, "Cage!"

Followers were already thrilled to see Idol return to the road after a setback earlier this year that saw him relinquish his spot on a joint Journey/Toto tour, and now with his brand new single "Cage" on shelves and streaming, they've got even more to look forward to in the coming months.

"It's just one of those things, more annoying really," Billy tells Audacy host Jolene. "I had a bit of an MRSA sinus infection, it's just very difficult to get rid of because it's resistant to most antibiotics... but I'm there now."

Idol's previous offering, The Roadside EP, arrived in September of 2021, his first collection of songs since 2014's Kings & Queens of the Underground.

Simply captioned "Tomorrow," and capped off with his signature BFI (Billy F'n Idol, if you're new here), the British rocker teased fans on August 16 with a clip featuring his next high-octane single, "Cage," set for release the following day. Quintessentially Billy, the new track he says came about after The Roadside EP sessions, when he had been able to live with and truly marinate in the new pandemic world. "We actually did write a pandemic anthem; that's what 'Cage' really is," Billy explains. "Although, it isn't just about that... We were looking at Sunset [Blvd] here in Hollywood, you know the shop windows were boarded up, it's like they boarded up our ambitions."

"We'd been locked in so long, I had been fighting with my demons so long they'd become my friends," he continues,. "We kind of got that frustration out... but that could be about anything in society that's holding you back."

Stream and download Billy's new single “Cage,” right now and pre-order the forthcoming four-song Cage EP -- set for release on September 23 via Dark Horse Records -- on your choice of CD, vinyl LP, and limited edition red vinyl LP with a limited amount of signed copies available while they last.

While you're here, check out a list of Billy's current U.S. tour dates below... Tickets are on sale now. He's also gearing up to tour South America for the first time in 30 years, including opening spots for Green Day and an appearance at Rock In Rio. Follow along with Billy for updates.

Watch our full Audacy Check In with Billy Idol above -- and stay tuned for even more conversations with your favorite artists right here on Audacy.com/Live.

Listen to your favorite music now -- curated for fans, by fans -- on Audacy’s Billy Idol Radio!

Check out even more of Audacy's all-new Rock stations like New Wave Mix Tape, Punk Party, 80s Underground, Rock N’ Road, Freedom Rock, The Canyon, Arena Rock, Wake Up and Rock, and The Roots of Rock for those who crave the early days.