In the aftermath of the Bruins’ Game 7 loss to the Hurricanes last Saturday, all eyes shifted to three key figures in the Boston organization as we awaited news on their futures: captain Patrice Bergeron, coach Bruce Cassidy, and general manager Don Sweeney.

So far, the only one we’ve gotten a clear answer about is Sweeney. Bruins president Cam Neely said on Thursday that he intends to extend his GM, although the details of a new contract still need to be hammered out.

The Bruins don’t have any control over Bergeron’s decision or timeline. They’d obviously like an answer before they really need to dig into the team-building part of the offseason, but there’s still a month and a half before the draft and free agency.

They have full control over what happens with Cassidy, though, and right now they’re letting him twist in the wind. While Neely put an end to speculation about Sweeney’s status, he was noncommittal when asked about Cassidy. He said Cassidy’s future will ultimately be decided by Sweeney, and that he hadn’t yet spoken to Sweeney about Cassidy.

“I haven’t really talked to Don about it yet,” Neely said. “He hasn’t really given me an indication, probably because he wasn’t really sure what his situation was.”

Even if that’s true, Sweeney is much more sure of his situation now. It’s been more than 24 hours since Neely made it clear he remains committed to him. If Sweeney, in turn, remains committed to Cassidy, he could put out a statement or leak it to his reporter of choice at any time and squash the speculation and uncertainty.

The fact that hasn’t happened can only lead us to believe that firing Cassidy, who reportedly has one year left on his contract, is an option that is being seriously considered.

Which leads to the question: What would firing Cassidy actually accomplish?

It is entirely possible that a different coach, with a different voice, different approach and different way of running a team, would be able to get more out of this roster than Cassidy has.

We should not make the same mistake that many of us (myself included) made when the Bruins fired Claude Julien in 2017, which was jumping to the conclusion that because the coach wasn’t the biggest problem with the team, firing him was a mistake.

While still acknowledging that Julien was a mostly great coach for the Bruins, it didn’t take long to see that the switch to Cassidy was a good thing for the Bruins at that time. It’s possible that five years later, we’ve now reached the point where a switch away from Cassidy proves to be a good thing, even though Cassidy has been a very good coach and is not the team’s biggest problem.

But it’s also fair to wonder if firing Cassidy would be a move made just to distract from what is the team’s biggest problem, which is the roster that Sweeney has given Cassidy.

Sweeney, not Cassidy, is the reason that the team’s ample cap space last summer was spent on bottom-of-the-lineup depth players -- including two fourth-liners who combined for just five goals this season -- rather than a true second-line center or another impact scorer to make up for the loss of David Krejci.

Sweeney, not Cassidy, is the reason that the Bruins have not had a young, homegrown player force his way into a top-six forward role or top-four D role since Charlie McAvoy’s emergence in 2017. Heck, the reason Sweeney spent so much money on Nick Foligno, Erik Haula, Tomas Nosek and Derek Forbort was that he didn’t even have enough faith in his prospects to fill bottom-six and bottom-pairing roles.

Maybe Cassidy is too hard on young players. There’s no question he’s been demanding on the likes of Jake DeBrusk, Trent Frederic and Jack Studnicka, requiring them to shore up their defense and the finer details of their games, and sometimes benching them when they don’t.

“I think that's one of the things we have to kind of change,” Neely said. “I think when younger players make mistakes, they're worried they're not going to play the next game while that game is still going on.”

But who are we actually talking about here? The three we mentioned aren’t all that young anymore anyways -- DeBrusk is 25, Frederic 24, and Studnicka 23 -- and a big reason Cassidy demands defensive consistency is because they haven’t brought enough offensive consistency, with the notable exception of DeBrusk in the second half of this season.

And Cassidy should get at least some credit for finding a way to make it work with DeBrusk this year despite their past differences and despite DeBrusk’s trade request. When DeBrusk’s play warranted praise, Cassidy was happy to give it, and did so consistently down the stretch and into the playoffs.

Which other young players have been held back once they’ve arrived in the NHL? Again, there haven’t exactly been a ton of them coming along in recent years. You know who would like to have more of them? Bruce Cassidy.

“I think it’s good for a team to incorporate young guys every year if there’s room,” Cassidy said on Tuesday. “It just brings some energy to the room. It brings a young kid in that hasn’t been around, so there’s that youthful enthusiasm. We saw that with [Jeremy] Swayman a little bit. Over years past, McAvoy and [David Pastrnak], and [Jakub] Zboril was starting to be a bit of that, [Jeremy] Lauzon until he got picked up.

“I think it helps your group, so we have to look at that as well. Who’s ready? You can’t force them in, but who’s ready? Those will be the questions watching our guys down in Providence or the guys we just signed. [Fabian] Lysell’s obviously in that group. We’ll see where [Johnny] Beecher’s at. He came out of college, now he’s a pro.”

Whether there are young players consistently ready to contribute is ultimately a drafting and development issue. The NHL head coach can only do so much if players aren’t ready to take advantage of their opportunities when they get called up.

Another area where the coaching vs. personnel debate is clearly popping up right now is the Bruins’ playing style. Neely was adamant on Thursday that the Bruins needed to change the way they play in order to score more in the playoffs, when there tends to be less open space and fewer rush chances.

“I think we have to look at making some changes as far as how we play and the way we do some of the things,” Neely said. “…The playoffs certainly gave me some indication that we’ve gotta do a little better job of getting inside the dots. Maybe not try to have such a rush mentality. I thought we were getting a little stubborn at times, turning pucks over at the blue line, whether it was the entry on the power play or 5-on-5.”

Sweeney brought up the same point the day before.

“It’s great to be idealistic and say, all right, every clean breakout leads to a great transitional play through the rush, and that’s what forwards want,” Sweeney said. “But when the other team does what they’re supposed to do, that doesn’t necessarily present. So, how do you create in-zone? Earlier in the year, we weren’t creating as well cycle-wise, and then we got much, much better, got to the interior. Even watched Taylor Hall transform his game a little bit, going to the net-front and doing a pretty good job there. Those are areas that can be improved in players. And that’s how you have to manufacture offense.”

Wait… but if they got better at it as the season went on, isn’t that a credit to Cassidy? It should be, because you know who’s been beating this same drum all year? Cassidy.

From the moment he put the Taylor Hall-Erik Haula-David Pastrnak line together -- a move that helped turn the Bruins’ season around -- Cassidy impressed upon them that, while they found immediate chemistry as a rush line, they would need to work on improving their cycle game and in-zone play before the playoffs. Whether they ultimately improved enough in that respect is debatable, but they most certainly did improve, as we covered in more detail here.

“We need to find ways to generate more offense,” Cassidy said this week. “Is the personnel in place to do that and we’re just playing the wrong way? Do we sacrifice defense -- what we’re very good at -- to generate some offense? We have to consider that. That’s definitely a possibility. Are there some players that can give us more? There always is.

“I thought we got a lot out of this group, especially the second half. The offensive numbers showed that. So we have to figure out, how do we get them to do that in the playoffs as well? That’s a challenge for the staff, as well as the player himself, to know that the game shrinks a little bit, the ice available. So building in those cycle scoring chances as well as rush chances.”

Again, everyone is identifying the same problem. Neely, Sweeney and Cassidy are at least on the same page in that respect. And Cassidy seems open to the idea of modifying his system. Mentioning the possibility of sacrificing defense was actually further than Sweeney was willing to go. When he was asked about that idea, he said, “I don’t think we’re going to stray from a foundational standpoint.”

“In terms of fundamentally how we want to play, I don’t think that necessarily needs to [change],” Sweeney added. “But pockets of the game that we can continue to improve upon – I think that’s what Bruce, in our discussions, saying, ‘OK, where do we trade this?’ You know there’s going to be a trade-off. If you’re hell-bent to just try and tilt the ice all the time, you’re going to trade it off somewhere. You might want to wish your goalies luck at the start of the year if you’re going to play that way.”

So, if the Bruins aren’t trying to fundamentally change how they play and are only trying to make some tweaks, we’ll ask again: Why is Cassidy currently twisting in the wind? What would firing him actually accomplish?

Aside from changing the voice in the room and distracting from Sweeney’s harder work of building a better roster, it doesn’t seem like much. 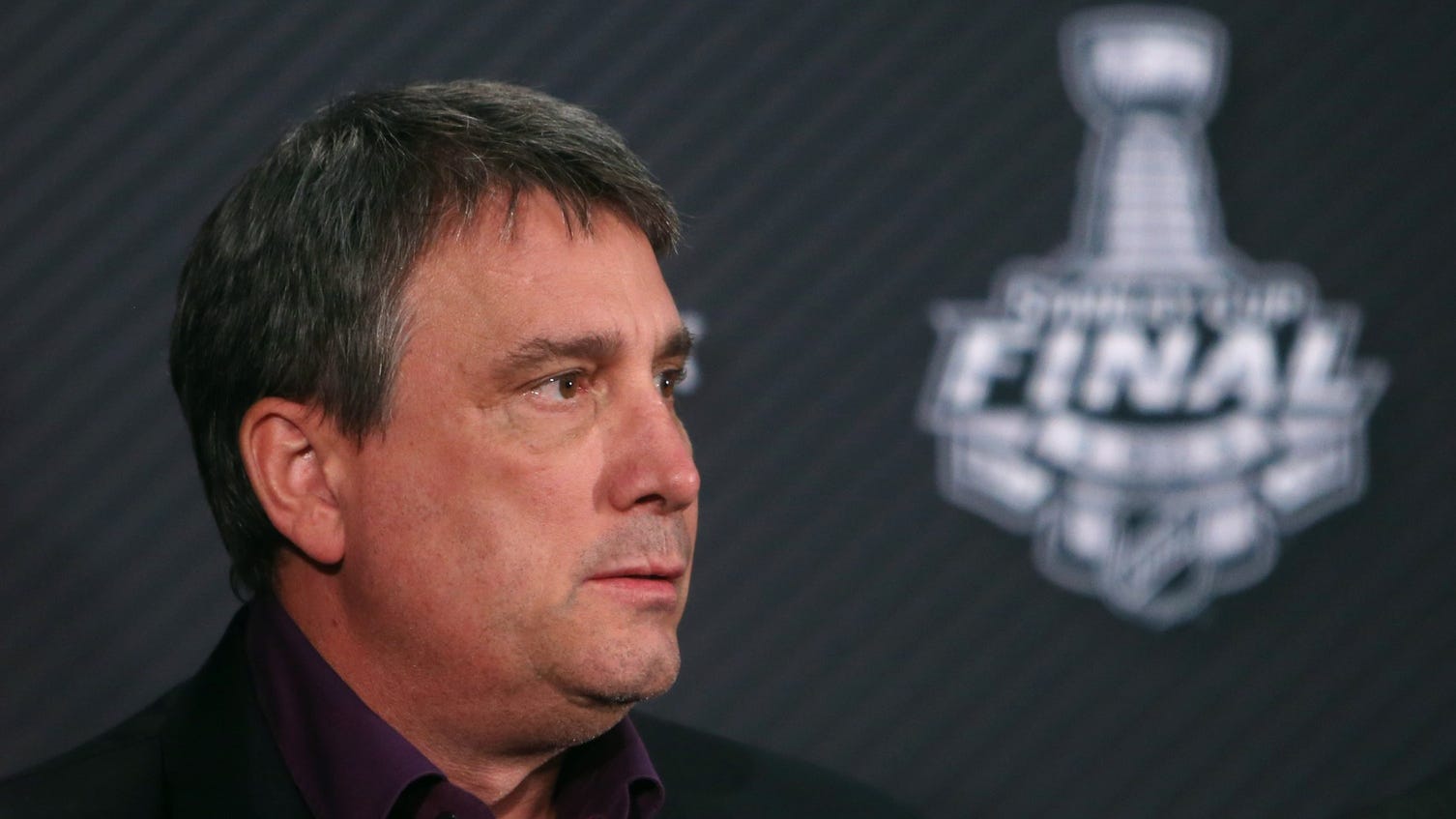 Cam Neely weighs in on the possibility of a Bruins rebuild