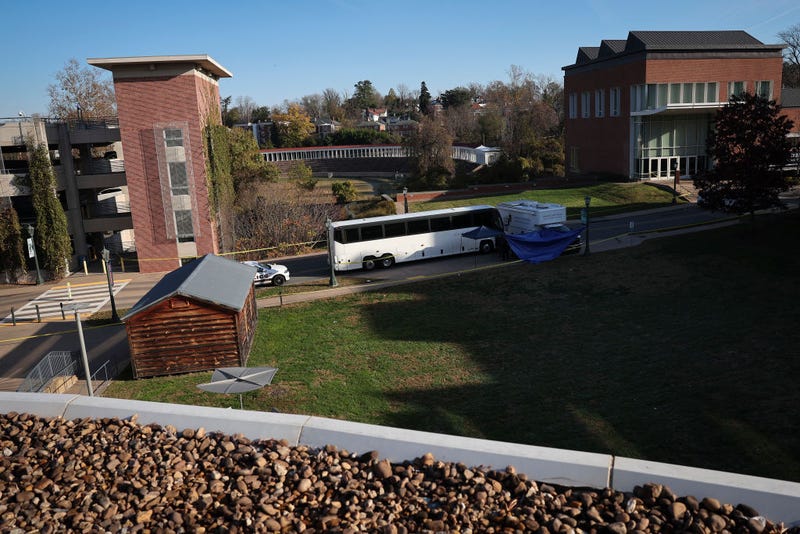 The crime scene where 3 people were killed and 2 others wounded is shown on the grounds of the University of Virginia on November 14, 2022 in Charlottesville, Virginia. Photo credit Getty Images
By Stephanie Raymond

An overnight manhunt has ended with a suspect in custody following a shooting at the University of Virginia on Sunday evening that left three football players dead and two others wounded.

According to the university, the shooting happened around 10:30 p.m. on UVA's campus in Charlottesville, triggering a "shelter in place" warning.

University police identified the suspect as Christopher Darnell Jones. Just after 11:30 a.m. Monday, police confirmed Jones was in custody. Other details surrounding his capture were not immediately provided.

Early Monday morning, police said a complete search was being conducted for Jones on and around campus grounds. After nearly 12 hours on lockdown, the shelter in place order was lifted around 10:30 a.m. "based upon a thorough search on and around the grounds," police said.

The UVA Police Department is looking for Christopher Darnell Jones regarding the shooting incident that occurred on the grounds of the University of Virginia. Call 911 if seen, do not approach.

Posted by University of Virginia Police Department on Sunday, November 13, 2022

"Multiple police agencies, including the Virginia State Police helicopter, are actively searching for the suspect," UVA police tweeted several times throughout the night.

Authorities say Jones opened fire inside a bus full of students returning from a field trip Sunday night, WTTG-TV reported. Three people were killed and two others were injured. The bus was on school grounds, near the Culbreth parking garage, when the shooting happened.

A motive is not clear.

The two injured students are hospitalized; one is in good condition and the other is in critical condition, per WTTG. Both are also said to be football players.

An update on the active shooter incident at UVA: pic.twitter.com/LLshF8JJcR

All classes have been canceled Monday and only designated essential employees have been instructed to report.

Jones, a student at the school, is said to be a former UVA football player; the victims, once his teammates. He's reportedly facing multiple counts of second-degree murder and handgun charges.