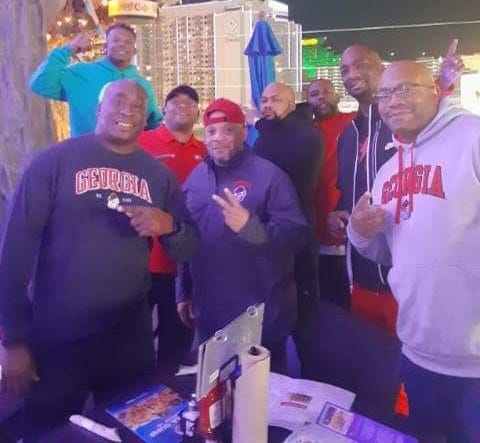 Former Dawg Derrick Byrd (2nd from right) and the family and friends crew spend some time in Las Vegas before heading to Los Angeles for the UGA versus TCU championship game. Photo credit Derrick Byrd
By Maria Boynton

"I am so excited for my dawgs. It's been a longtime coming," says former Defensive End and Offside Linebacker Derrick Byrd. The former UGA football player (93-97) under coaches Ray Goff and Jim Donnan, says current coach Kirby Smart has "brought this program to new levels." It's a heightened level of confidence Byrd says of Smart, "he brought in a new vibe and a new environment."

Georgia goes against TCU tonight in southern California with hopes of hoisting the National Championship trophy for a second season in a row.

While Goff and Donnan also lead the team to post-season bowl play, the current team under Smart "is unlike anything seen in the past 40 years," says Byrd.

Smart has instilled the belief that they can win says Byrd, "and he's taken that belief to another level."

Byrd, along with his family and friends crew, flew out of Atlanta Saturday. "Since Kirby's been there, we've been to 90 percent of the games. It's college football and you never know when you're going to get to the big game again. So, I'm just making memories with my friends."