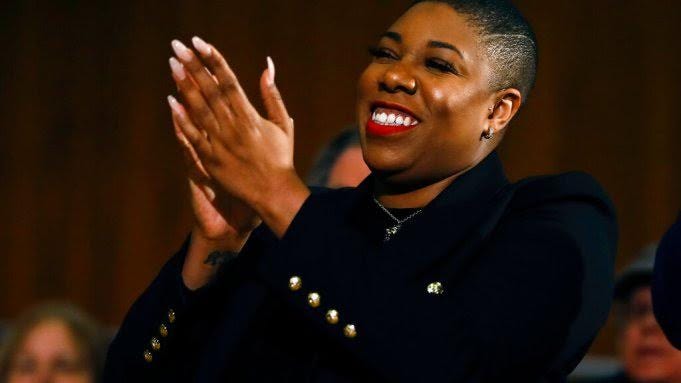 Symone Sanders hosts her own show on MSNBC starting Saturday and Sunday at 4pm. She is the former Sr. Advisor to Vice President Kamala Harris. Photo credit Symone Sanders
By Maria Boynton

My interview with Symone Sanders, former Senior Advisor and Chief Spokesperson to Vice President Kamala Harris, was to talk about her new MSNBC show starting this weekend. Yet, I asked Sanders about other matters as well.

So what was her biggest lesson after working a year in VP Harris' office? According to Sanders, "the need to not just take the headlines, but to provide context, profide nuance and dig a little deeper." She says it's something Vice President Harris always challenged her team to do. It's a lesson Sanders says that she and her team are taking into her new job as television host, "as we think about the kind of conversations we are trying to craft and facilitate."

"Amazing", is how Sanders describes Karine Jean-Pierre being named the new White House Press Secretary beginning May 13th. She says, "Because of Karine, there are so many young people in this country that are going to dream a little bit bigger seeing her in that role." Jean-Pierre will be the first black and reportedly the first open LGBTQ person in the position.

The show titled "Symone" airs Saturday and Sunday at 4pm. According to Sanders, "it's the news folks need to know from politics to pop culture." Her first guest is First Lady Dr. Jill Biden. "I talk to her about everything from the possibility of Roe (versus Wade) being overturned, teaching, her life as FLOTUS, and her trip to Romania and Slovakia."

We also discussed what Sanders thinks about the possibility of the landmark U.S. Supreme Court decision protecting a woman's right to have an abortion being overturned. I spoke with Sanders today. The conversation has not been edited.