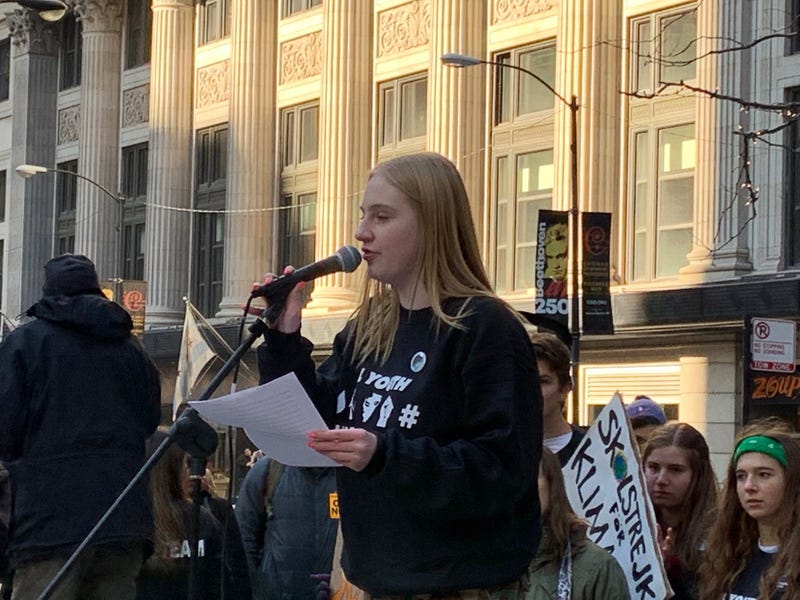 CHICAGO (WBBM NEWSRADIO) -- The protesters marching through the Loop filled the sidewalk for a full city block. Not as huge a crowd as the earlier action by the Illinois Youth Climate Strike, but a student named Ella told a rally at federal plaza that protests matter.

She noted climate change is a major topic in the 2020 Presidential Race while it was only a side issue in 2016.  A 13-year-old protester told the crowd she shouldn’t have to be there on a school day but is present because many adults are not taking action to save the earth and the life on it.

The block long-crowd of protesters made its way noisily though the Loop to end with a rally at Federal Plaza. The young people raised their voices against those who they say ignore the warnings about climate change. Dara, an eighth grader from Whitney M. Young Magnet High School said, she’s 13 and shouldn’t have to be there. Intead, she said she should be studying math but students like her must raise their voices.

Another teenager challenged those who say protests like this don’t matter. She pointed out that more people are talking about and acting against climate change and, as Ella mentioned earlier, it's being debated in the presidential race now.