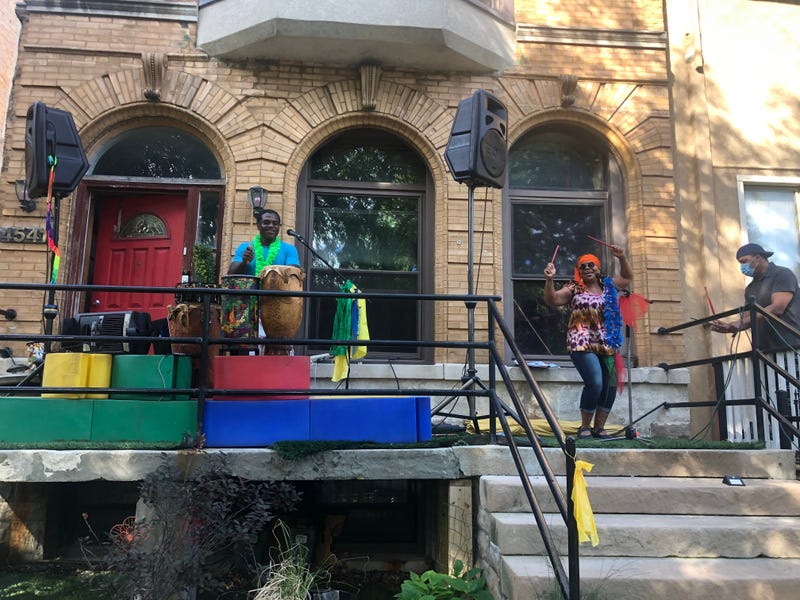 CHICAGO (WBBM NEWSRADIO) -- Every day for more than three months, Yakini Ajanaku-Coffy has stepped out of her front door in the North Kenwood neighborhood to bring the community together through music, playing alongside her husband, Jean-Paul Coffy.

“Music is always uplifting, music is always a way for people to connect and that was much-needed in that time,” said Coffy, after playing music for his neighbors on a recent hot summer day.

The couple run a music-based preschool called Lagrande Famille out of their home in the 4500 block of South Lake Park Avenue but when the pandemic hit, the preschool closed its doors. That's when the music parties were just getting started.

“Our first day was March 22 when we started and we have never missed a day since," said Ajanaku-Coffy. “What we noticed was that the community was grieving but the music allowed people who live alone, seniors who could not come out, a chance to hear something that made them feel good.”

The couple call their music series “Lake Park Fired Up!” and have played a wide array of music genres, original songs and covers in the last few months.

The free concerts brought dancing neighbors and families to the couple’s patio, wearing masks and spreading cheer at a distance. To really get the block "fired up," the musicians shouted out the names of their neighbors to remind them that they matter and are needed in the community, especially in times of hardship.

"It becomes a melting pot, we have all generations and ethnicities that come to the block," Johnson said. "They all come to the block and it’s a peaceful time. I wish this could happen on every block. It brought our block and our community together."

But now, as neighbors return to work, the free concerts are coming to an end — though the music will never stop, the musicians said, who also run an online educational music program called Music Magic Time that is the cornerstone of their preschool's curriculum.

The last free “Lake Park Fired Up!” show is scheduled for Saturday from 1 to 6 p.m.

"We are healing the community, one house at a time," the couple said with a beaming smile and praise to the power of music.