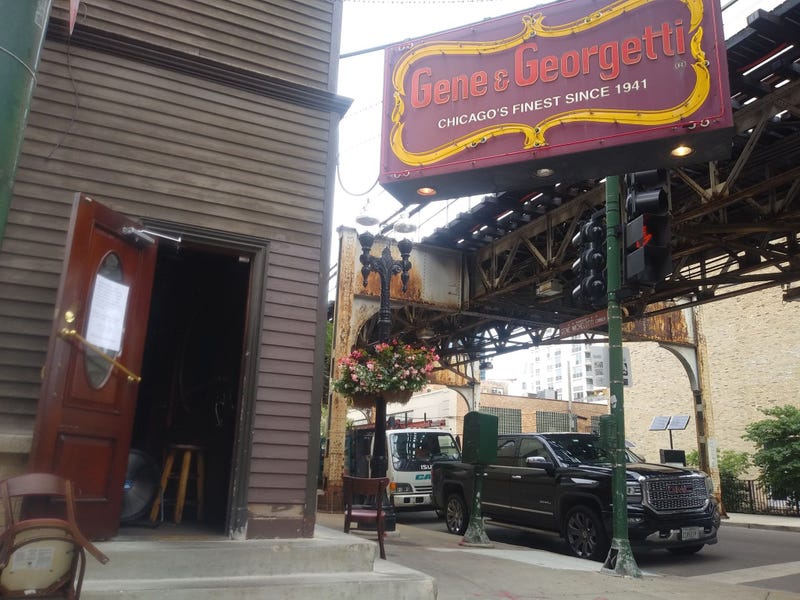 CHICAGO (WBBM NEWSRADIO) -- The windows were open Saturday afternoon at Chicago's oldest steakhouse, and the doors were propped with chairs while fans were running to dry out the section firefighters had extinguished earlier in the morning.

Firefighters were alerted to a fire at Gene & Georgetti Steakhouse in River North just after 6:30 a.m. and controlled the fire just before manager, Michelle Durpetti, who is also a co-founder's granddaughter, arrived at the scene.

"They were amazing," she said. "The Chief was wonderful. Je came up to me put his hand on my shoulder, reminded me to breathe, and was like 'We know this is a big deal; we're here for you."

According to police and fire authorities, the fire broke out in a flue just after 6: 30 a.m. while a worker was cooking. Fire officials said they could see smoke rising from the roof after they arrived at the scene.

No injuries were reported. The original woodwork in the building was not damaged.

Firefighters told Durpetti that they all love the place just as much as the family does.

"It's such an honor for me, these are people that are saying my grandfather's name everyday. He's been gone since 1989." Gene Michelotti, who immigrated from Lucca, Italy, to the United States when he was 15, is her grandfather.

Because the firehouse was located just blocks away, firefighters said they were able to quickly arrive and save the classic,wood-framed side wall of Gene & Georgetti.

No one was hurt, but the building remained closed Saturday. Managers said they hoped to reopen the eatery in the next few days.

Michelotti, Durpetti's grandfather, first worked as a night watchman, porter, and dishwasher after he arrived in the U.S. In 1941, he partnered with Alfredo Georgetti Federeighi to open Gene & Georgetti's. The iconic Chicago steakhouse has remained in the family for decades and is now owned by Durpetti , a third-generation manager, and her husband, Tony.

Marion said that when she first heard about the grease fire Saturday, she was shaken.

"When I arrived. I was in tears," she said. "It was incredibly emotional."

She said she gives thanks to Engine 42 firefighters and to emergency responders in the 18th district, all of whom she said kept the flames down with no injuries and no grave damage.

"They were so comforting when I got here," she added.

Durpetti said she hopes to have Gene & Georgetti reopened within days, and added that she will continue posting updates online.

Early Saturday, the restaurant posted messages on social media and the eatery's website that said the venerable restaurant would be closed until further notice. They asked patrons to call 312-527-3718 with questions.

Gene & Georgetti opened in the city in 1941. In 2001, it earned a DiRōna award from the non-profit inspections program that evaluates fine dining restaurants in North America, according to the restaurant's website.

The Rosemont location is open for regular business hours.