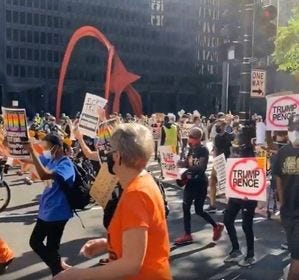 The group Refuse Fascism, organized protests in 23 cities across the country, including Chicago's, where many people wore Trump masks and held up signs that read, "Flush the turd."

“We must make a living declaration to the world that we are uniting, we are organizing, we are determined, we are preparing to struggle with all we’ve got, starting now and not stopping until the Trump/Pence regime is driven from power and its fascist program brought to a halt," said Refuse Fascism spokesperson Andy Zee.

Other signs read ‘Trump/Pence Out Now’ and speakers said they won’t wait until the November election to remove the Trump administration from power.

“Donald Trump is building a case to delegitimize the results of our electoral process and the election in November," said Robert Garcia of Refuse Fascism Central and Southern Illinois. "He’s already claiming fraud before the election even happens. That’s what fascists do."

Protesters made their way from Federal Plaza to Trump Tower, escorted by dozens of Chicago Police officers on bicycles. Members of Refuse Fascism Chicago also protested in Kenosha on Monday when President Trump met with police following the shooting of Jacob Blake.