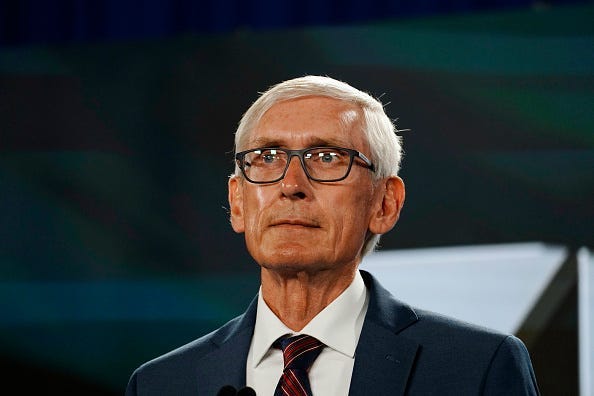 (WBBM NEWSRADIO) -- Wisconsin Gov. Tony Evers said Thursday he’ll look into reports that Jacob Blake — the Black man shot seven times in the back by a Kenosha police officer — is being handcuffed to his hospital bed as he tries to recover from serious injuries.

Evers said he would advise authorities to make changes if Blake is, in fact, restrained: "I would have no personal understanding why that would be necessary."

Blake’s circumstances were reported by his family.

“I hate it that he was laying in that bed with the handcuff onto the bed,” Blake’s father, also named Jacob Blake, tells the Chicago Sun-Times.

“He can’t go anywhere. Why do you have him cuffed to the bed?”

The elder Blake said he’s not sure what his son was even arrested for. Wisconsin state officials who are investigating the police-involved shooting say officers had been called to a domestic disturbance when they encountered the younger Blake.

He walked away from officers and was reaching for something in his vehicle when one officer fired the seven shots into Blake’s back, the Wisconsin Attorney General said.

Federal prosecutors say they have opened a civil-rights investigation with the FBI.

Evers and his lieutenant governor met with reporters Thursday to offer an update about the shooting Sunday and subsequent violence that occurred during protests. National Guard members from Wisconsin and other states will try to help police keep the peace.